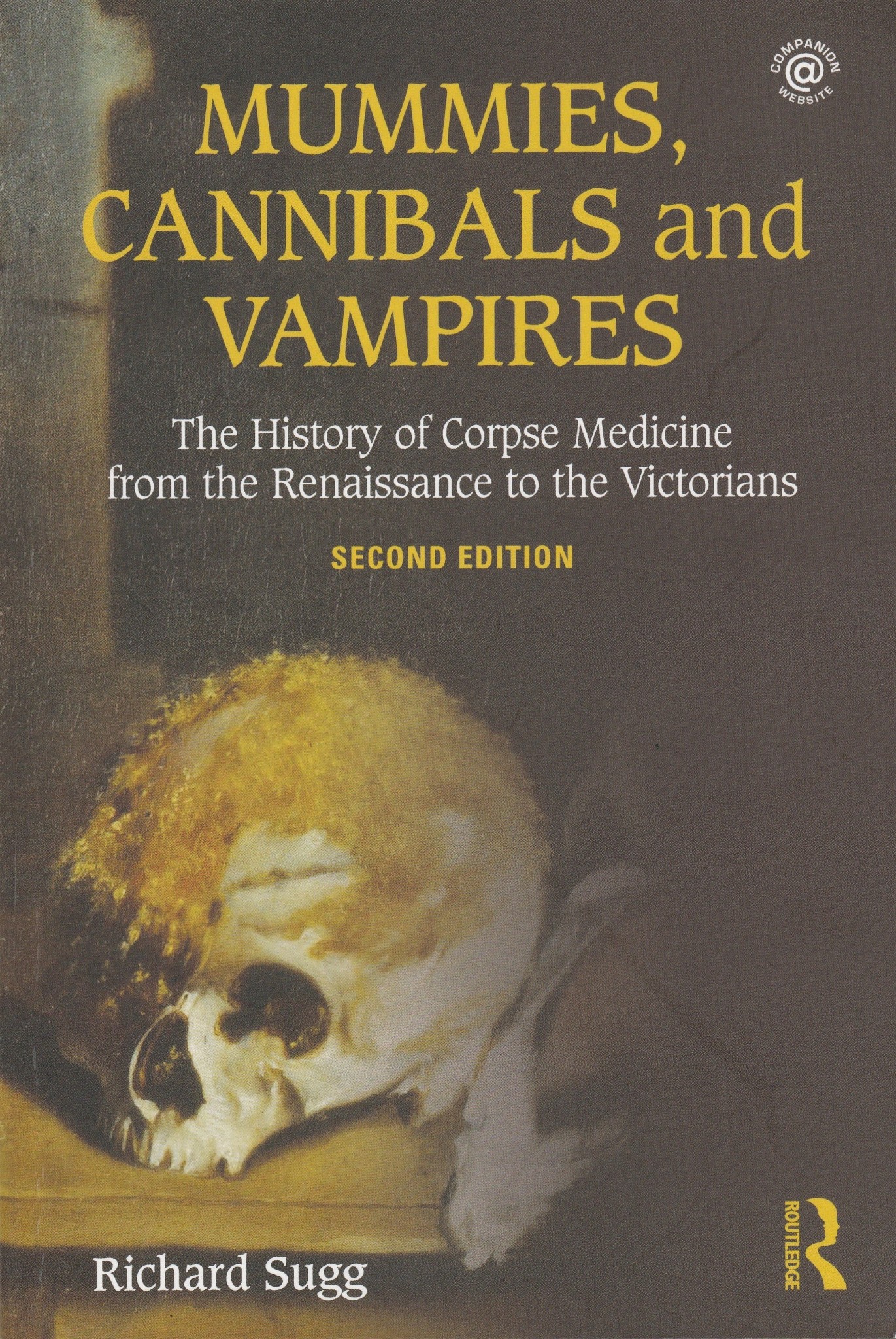 An enormous heap of curious information.

Does that suggest that your devoted reviewer has been less than wholly entranced by Richard Sugg’s opus? It is all too terribly true. Dr Sugg (his Twitter handle) has amassed a large amount of information on a completely fascinating group of practices, all more or less connected with what may be termed corpse medicine: the devising of medical remedies from (usually) human bodies. Most of the bodies in question are dead, a fair number are not, and some are intriguingly ‘not very dead’.

The book, which sets out to be a ‘basic revision of the history of one of our deepest taboos’, is arranged in chronological order ‘from the Renaissance to the Victorians’ and indeed moves beyond into the current century and the horrors of organ harvesting. Unfortunately the recital of the various cures and the historical accounts of them is hampered by the good doctor’s literary style, by an over-reliance on literary over primary historical sources for some of the more basic aspects of English social history and by periodic time jumps to and fro to make my inner historian howl.

The icing on this jumble cake is the insertion in many of the chapters of little pieces of creative writing, in which Sugg (in the present tense; that most aggravating of docu-drama styles) relates historical fictions of his own devising. I imagine that this has been done to raise tension and to ‘draw in the modern reader’. Unfortunately, for anyone preferring a straightforward narrative and a lucid exposition of the facts as known, it is intrusive and just a bit exhibitionist; a too self-conscious attempt at being a cool dude and down with the ordinary folk. One wonders whether Sugg, for all his bravado, is not just a little bit worried that his readers might find him dull. Oh, and there is a ‘companion website’ which is itself mildly frustrating as it turns out to be a bit of web space hosted by Routledge as part of their book promotion and does not appear to add anything significant to the text.

Having spent years reading what my family call ‘weird stuff’ and what some former colleagues considered overdoing the background knowledge, I was reasonably familiar with the concept of corpse medicine and with the usual ingredients for that medicine. I also knew that some remedies in this class continued much longer than anyone in the 21st century might care to think. Certainly a cure involving splitting live pigeons was recorded in Deptford in 1900 (Opie and Tatem, A Dictionary of Superstitions OUP 1989). Sugg refers to its use by John Donne in the 17th century, and supposes that he was better able to deal with the idea because he was (as a clergyman) able to embrace the pigeons as God’s creatures. I would contest that. Split pigeon, while horrific to modern readers, was a well known cure and accepted as normal for a considerable length of time.

There is a certain bias detectable in the book against what is now usually termed ‘folk medicine’, which Sugg labels ‘magic’, the only recourse of the poor. While recounting extraordinary tales of the rich and their complete lack of conscience in using whatever and whoever came to hand in the search for effective treatments, he attempts no similar investigation into what the poor were doing for themselves.  There was without doubt a chasm between rich and poor during the entire pre-NHS period (and only slowly diminishing post the foundation of that service). However, the items in regular use in expensive, upper class medicines in the earlier part of Sugg’s chosen period (bones, blood, live pigeons etc.) are often visible further down the social scale in folk remedies recorded years later. Readers with experience of folk belief systems will immediately recognise the pattern of practices moving through society and then persisting as home cures, to be derided finally as ‘magic’ when something new arrived.

Indeed, prior to the discovery of inoculation and then later of penicillin, a great deal of what was once labelled ‘medicine’ could be seen as ‘magic’ by modern eyes, regardless of class distinctions. The great irony is that some of it worked and that some of it is being rediscovered with a sort of wonder that those old ancestors could possibly have known such a thing – an angle that is touched only briefly by this book. A certain urban squeamishness, possibly on behalf of the imagined modern reader (some 2012 Daily Mail readers apparently stoutly refused to believe that Good King Charles II used corpse medicine) pervades some of the accounts as the 20th century is approached. The impression is reinforced by the lack of reference to folklore material. Certainly this would not give formal medical recipes or procedures, but it might show where some of the earlier ‘rich persons’ medicine had gone.

Despite a clear fascination with his subject in the earlier periods and an articulate description of the almost science fictional 20th and 21st century horrors of organ harvesting, there seems to be a slight reluctance to accept that ordinary, harmless, normal people throughout the 19th and 20th century engaged in some form of home medicine, (magic? Dr Sugg, Woo-woo?). They felt that doctors by and large, should be used only after the home remedies had failed, or if they were definitely known to have a reliable cure to hand. ‘Always running to the doctor’ was regarded as slightly feeble. Children might be inoculated; babies were more frequently born in hospital, but home doctoring was a proud and continuing norm for many people, and some procedures and recipes were indeed very odd and ancient.

Gripes aside, however, the material in the book is completely fascinating. What I have not had in my own reading on the subject is the wealth of literary allusions and references that Sugg provides, and these, once the hurdle of florid literacy is overcome, are what make the book worth finishing. Just when did ground up Egyptian mummy become a medicine? There is apparently an account of preparing medicine from mummy in an Egyptian papyrus, contemporary with the period of creation of the mummies themselves. In the west it became known around the 12th century, when it appears to have been confused with the Arabic mumia: a mineral pitch, which was also used medicinally. When did it stop? Mumia – of unknown origin, truth be told – was still available from 18th century apothecaries, and ground up mummy for artist’s pigments, although no longer sold, is still around.  ‘Kings Drops’ a remedy of almost mythical potency, was derived from ground human skull and much favoured by Charles II. It was still being recommended ‘for convulsions’ in 1823.

And the range of sources is not confined merely to the English literature or to the English speaking world. Anthropological texts are cited for some of the more eye watering medical practices. For instance, p 182-3, on the subject of providing human soup for invalids, cites the Chinese example of Ko-ku and ko-kan, in which self-mutilation, leading in the extreme version to the self-excision of the liver, was considered a reasonable form of filial piety to provide an appropriate soup for a sick parent.

Dr Sugg (may we now call him Richard? Surely we have known him long enough to be so familiar?) is well and extensively read. He periodically lectures on Renaissance literature, and does not shy away from reading round his chosen subject and across many other disciplines. It is quite clear from his ease with his array of authors that he is competent in his field, and he has produced a wide ranging and at times compelling book. My irritation is that despite calling the book a history, it is more nearly a literary anthology, and points the way for some really necessary medico-historical research. Richard Sugg’s account of the surprise of medical historians at not knowing some of the things he has found out is worth reiterating: high time the medical historians set aside the squeamish old prejudices about investigating what the modern period sees as the nastier side of the profession and got down to documenting it properly.