The Tudor House Museum and the D-Day Wall, Southampton, Hampshire 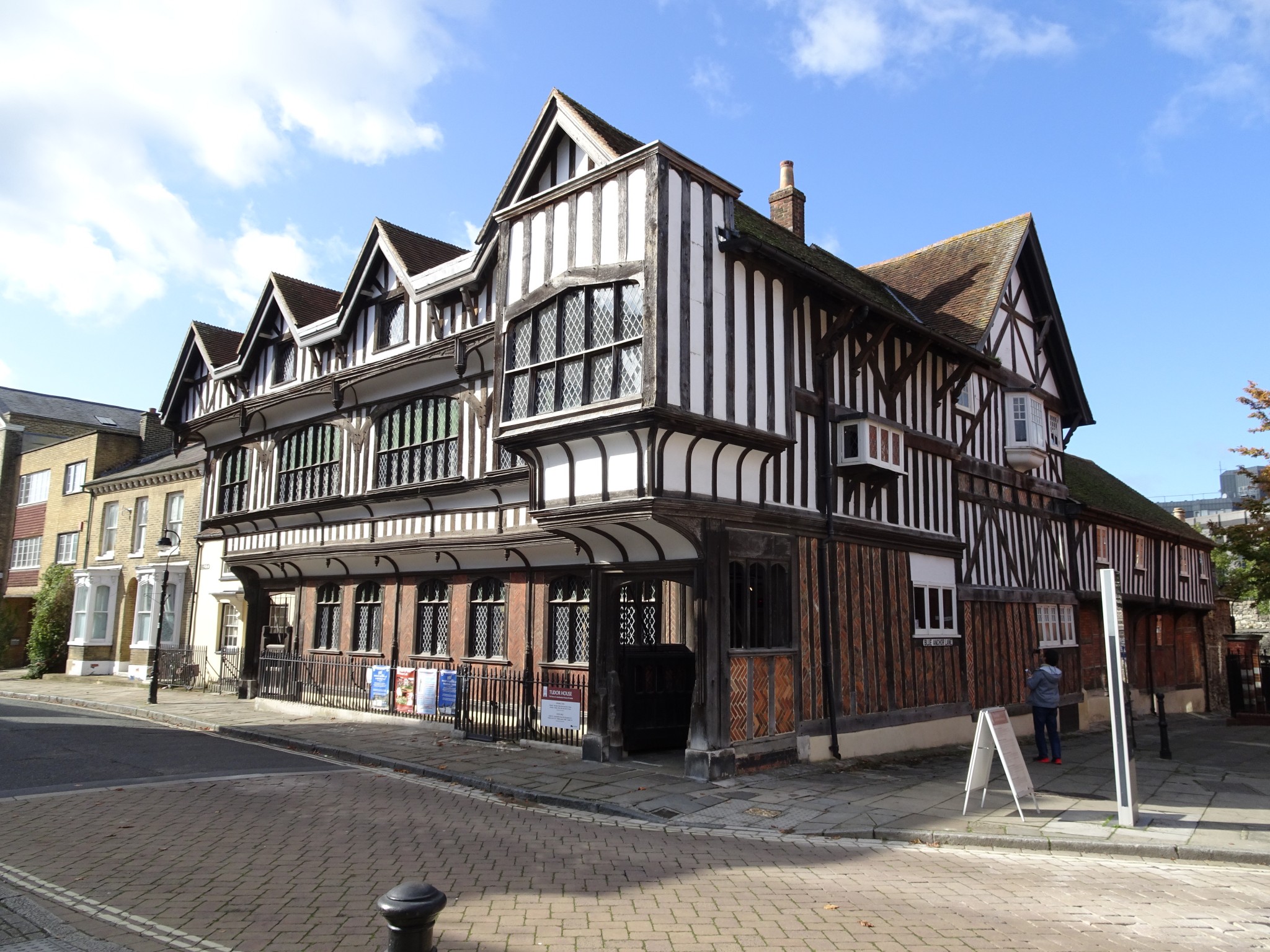 The Tudor House came into being in 1491, when Sir John Dawtrey, Overseer of the Port of Southampton and Controller of Customs, combined three smaller houses. It has a longer history, however, and its grounds feature the remains of a 12th century merchant’s house, that became known as King John’s Palace because of a mistaken belief that he stayed there once! By the 19th century the area had become a slum and the house was in a parlous state, when in 1886, it was taken on by William Spranger and ‘restored’ (in the inimitable Victorian fashion), eventually to open as a museum in 1912. By the 1990s, it was in need of further major refurbishment, from which it emerged in 2011. Many discoveries were made during the period of the work funded by Heritage Lottery Fund, including significant graffiti.

The Victorian plaster from a wall in a first-floor room (today called the Trade Room) was removed to reveal graffiti dating from approximately 1570-1620, when the house was owned by wealthy shipping interests. The images, scratched into the underlying lime plaster, now consolidated for their conservation, include caricatures of people, animals, ships and other marks. There is an excellent interactive display covering many of them in detail.

More graffiti is to be found on the walls of the other two upstairs front rooms, including daisy wheels, initials and what appear to be merchant’s marks, although one red-painted example is labelled as a likely “witch mark”. Daisy wheels have also been found on the window surrounds.

Downstairs, on the timbers of the corridor leading to the kitchens, there are taper burns and what is labelled as a “Witch Mark”, although the text does say it could be a merchant’s mark.

For those interested in apotropaia and concealed objects more generally, there are two interesting features in the Tudor House. Metal door furniture marked with X or IXI appears at least sometimes to have a protective function (see my paper X Marks the Post). Most of the extant examples are probably Victorian; some are older, but finding dates is difficult. In the Tudor House, the secondary, south-eastern street door has a bolt with X marks that is clearly from the Victorian restoration, but the main door, which has X marks on its latches, is definitely early 17th century and the interior door furniture is contemporary. The museum’s Nathan Stafford-King kindly proffered this detailed information.

In the 1970s, the then curator found a doll in the ceiling of the Work Room (behind the kitchens). It had been lost there in the 1930s – the museum was contacted by the woman who had been its owner as a child – but the fact has been memorialised with a label, and a replacement felt doll sits up on a beam. Whilst the original doll was not a deliberately concealed, apotropaic object, perhaps someone seems to have felt the room should not be left without a guardian? 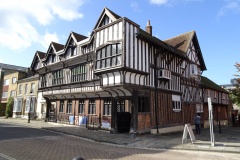 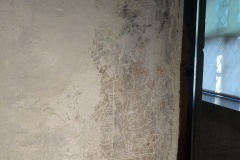 A section of the graffiti wall in the Trade Room 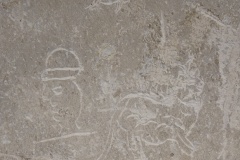 A rabbit, man and lion 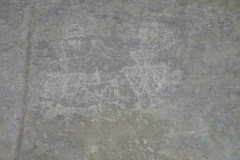 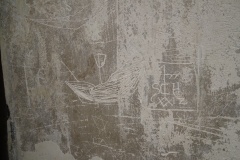 A section of wall in the Trade Room 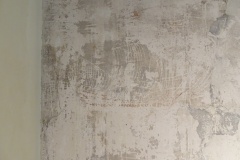 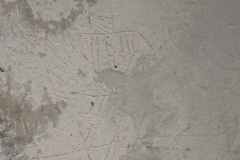 A knight with shield and sword 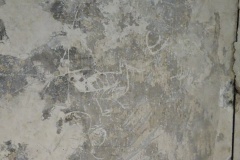 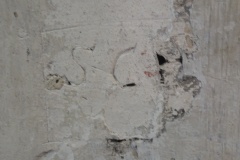 Initials in the Old Museum Room 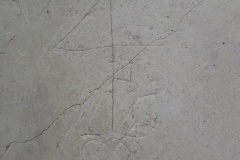 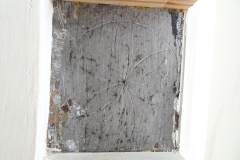 Daisy wheel at the window of the Rich Room 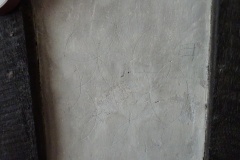 Daisy wheels on the wall of the Rich Room 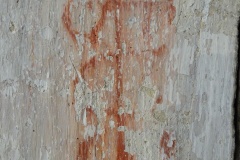 Painted mark in the Rich Room 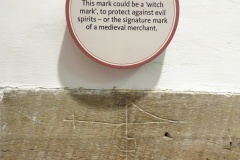 Mark in the downstairs corridor 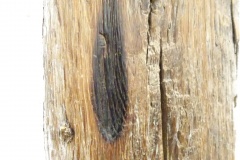 Taper burn in the downstairs corridor 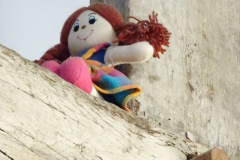 Replacement doll in the Work Room 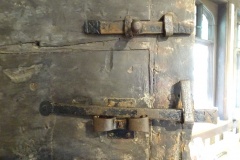 Early C17th latches with X marks on the inside of the front door
The Tudor House and Garden is open Monday-Thursday 10am-3pm and Saturday-Sunday 10am-5pm (not Fridays). It can be found on Bugle Street, SO14 2AD. 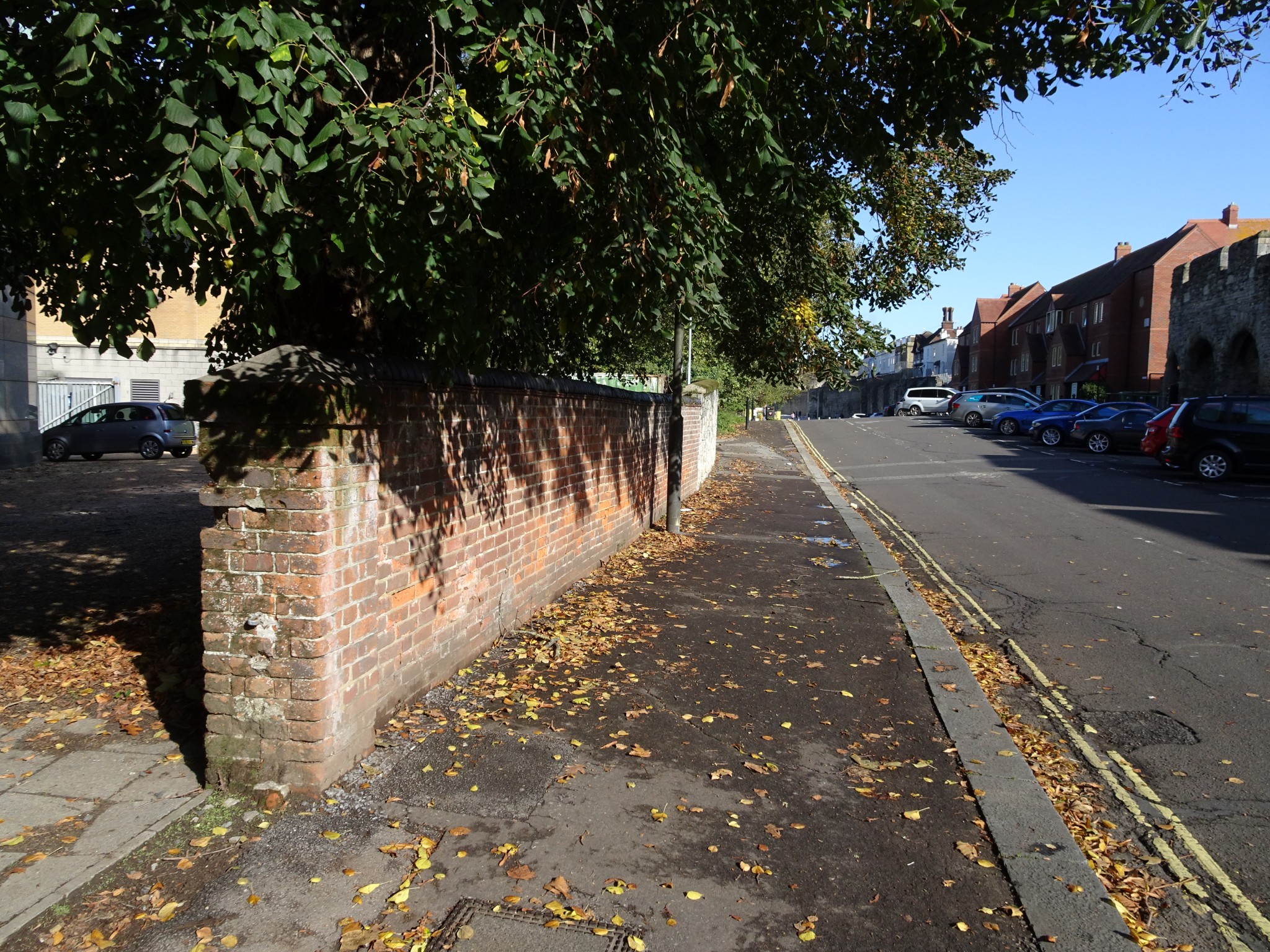 A stone’s throw from the Tudor House Museum, beyond the western town wall, is an area of reclaimed land around West Quay, now home to shopping and leisure facilities, and the Grand Harbour Hotel. A brick wall, dating to about 1910, forms part of the hotel’s boundary onto Western Esplanade, which runs along the foot of the town wall. The wall is covered with names scratched into its bricks. If you don’t know to look for it, it’s easy to miss from the other side of the road (I was fortunate that I got chatting to a passer-by who pointed it out) and it doesn’t feature on either the Welcome to Southampton or Southampton Old Town Walk tourist maps.

The names are those of American servicemen and their homes, carved before embarking for the D-Day landings in 1944. Southampton was a key centre of preparations for this operation and the marks left by around a hundred of those who took part, and perhaps never returned, are a sobering anchor in the modern city. 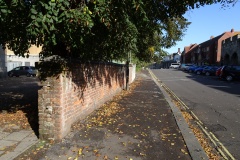 The D-Day Wall on Western Esplanade 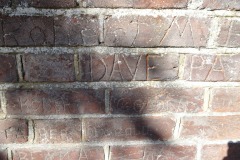 A selection of the names on the wall 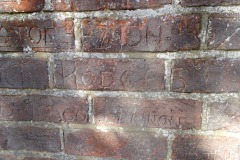 A selection of the names on the wall

The Mayflower Memorial
The wall is just around the corner from the Mayflower Memorial, but nothing has been done to make a link between the two, despite the poignancy of descendants of the ‘Pilgrims’ returning to help in Europe’s hour of need. A plaque, commemorating the two million American servicemen and -women who passed through Southampton in the latter part of the war, was added to the memorial in 1947, but, in the manner of official plaques, it does not stand out, and of course doesn’t mention the wall.
The Maritime Archaeology Trust is recording the graffiti and plans an interpretation panel as part of a project funded by the National Lottery Heritage Fund, but nothing is currently proposed for its conservation, despite the fact that it is being eroded by the elements.