It can be hard being a graffiti hunter in London. There have been three waves of destruction visited upon the medieval buildings of the City of London. There was the Great Fire of 1666, which destroyed so much of the old structure of the city. Then there were the Georgians and Victorians ‘improving’ and ‘restoring’ things. And finally, there was the Blitz. It is a lucky and rare medieval edifice that escapes all three.

The Temple Church, built in the 1180s for the Knights Templar, lies behind Fleet Street. It was spared by the Great Fire, but Christopher Wren and then the Victorians had their turn at improving it. If any graffiti in the round church survived these attentions we will never know as, on the night of 10 May 1941, incendiary bombs rained down upon the roof. When the smoke cleared, the roof and practically all the woodwork in the round nave and chancel were gone. The church has been wonderfully restored since then, but it has put pay to any graffiti in the body of the church.

However, all is not lost. The stairs up to the triforium do have graffiti. Most of it is tourist and workmen’s initials, but there are two architectural diagrams by the first turn of the staircase that are worth a second look. One is the outline of a building and the other a compass constructed trefoil. 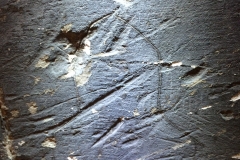 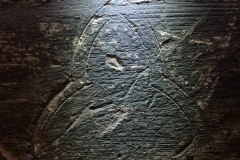 The rest of the graffiti is initials of either workmen or tourists. Not many are dated, and of those, they are mostly recent, apart from one dated 1938. 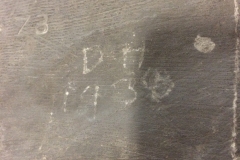 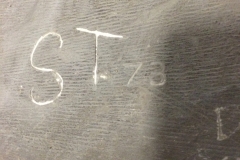 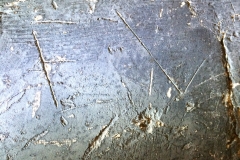 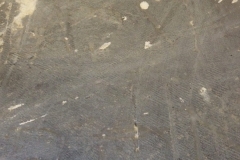 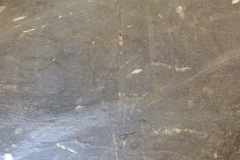 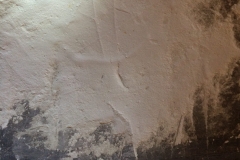 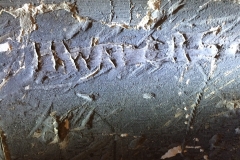 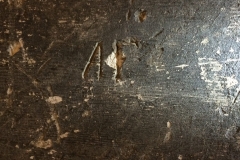 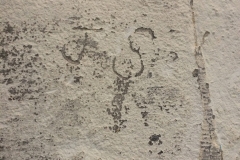 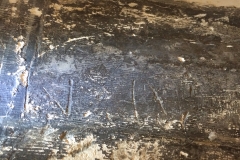 Open Mon-Fri 10:00-16:00 Price £5
NB Please check whether the church is open when you want to visit. It is a popular church for music concerts and other events and is sometimes closed for whole days during the week.