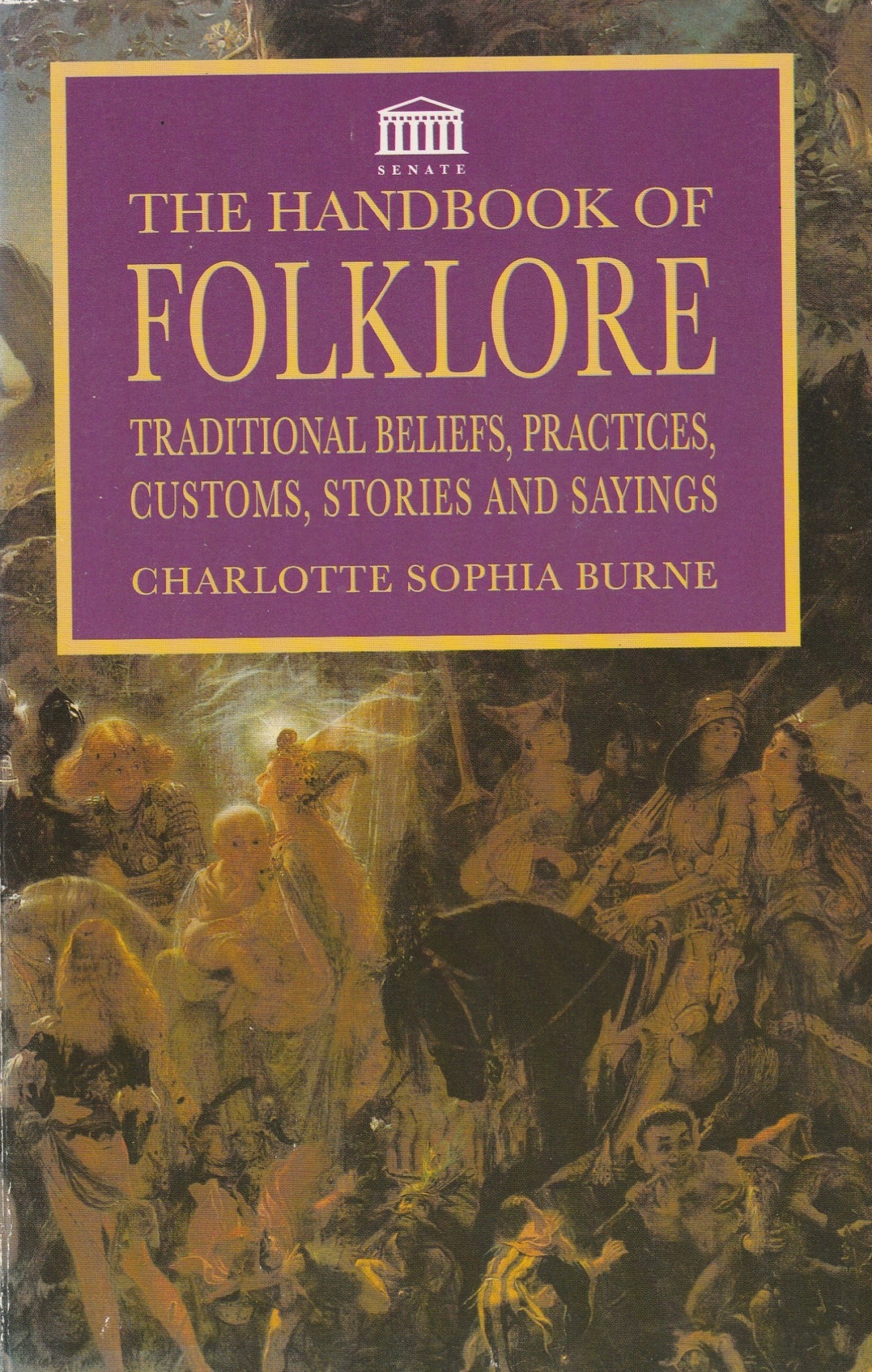 I have to admit to readers that, even in a sternly enforced lockdown, I found this book hard to get into. My usual practice on reviewing a book is to read it (or re-read: readers will have noticed that most of what I document is scarcely new) steadily from cover to cover, omitting nothing and making notes as I go. This method covers all the ground and should leave no room for accidental omissions. Charlotte Burne’s remarkable and considerable contribution to British folklore studies, and in particular to the Folklore Society, of which she was the first woman president, was well known to me. Her Shropshire Folklore, (1883), published when she was 33, was the first comprehensive folklore of a county, and later folklorist Katharine Briggs called it “perhaps the best county folklore book we possess as well as the most monumental”. Extracts from her other extensive writings pepper later accounts of strange or folklore related events, so a chance to read her revised second edition of the Folklore Society’s only official guide, The Handbook of Folklore, in full, seemed like a good choice for a spell of enforced inactivity.

The book is available online, and as a cheap paperback reprint. Hardback copies of the 1914 edition are available, but eye wateringly expensive and, unless you really need an original binding, completely unnecessary.

The difficulty I found at first, and which repeatedly confronted me, was that Ms Burne’s writing is, frequently, the writing of her time. In attempting to produce a serious handbook, for a serious study, of what she regards as a serious scientific subject, so much seriousness leads to pomposity, and to a style so rigid in its correctitude that sometimes she seems barely able to articulate. When she forgets her late Victorian virtues and her late Victorian audience, she is absolutely cracking: completely engaged with her project and the need to get it down in words as accurately and swiftly as possible; engaging, lucid and intelligent.

The main aim of the book was to revise the Handbook for Folklore Collection drawn up in 1890 by Sir Lawrence Gomme. Ms Burne says that his original work needed little improvement, and that she has simply amended it, including contributions from other writers, more expert in certain fields, when necessary, and acknowledging them as appropriate. The late Sir Frank Stenton (d. 1967), for example, well-known historian of Anglo-Saxon England, and former president of the Royal Historical Society, contributed the section on English village life. A large number of writers, or their published works, provide insights into folk practices worldwide, many of which are taken to illustrate the commonality of all human experience: ‘Examination of the ideas which give birth to folklore practice has shown us the similarity, nay, the identity, of the early workings of the human mind throughout the world’. A not unworthy observation, and in general, when Ms Burne is in full flow, expressed in other places in kindly and empathetic tones.

Unfortunately, because the book is, after all, written in the period of Empire, the overseas observations are frequently of ‘the primitive races’ and ‘backward nations’ who are seen as living in an age which the enlightened European has left behind, but whose behaviour may indicate how our (thankfully far distant) ancestors operated. It was this, an attitude prevalent in the heavy duty Introduction, which made the reading so difficult. It is not how we think or work now, and after two pages of it I began to feel that the book might not be worth the candle.

What I would say, to anyone embarking of Ms Burne’s handbook is this: keep going. Unless you seriously want to find out how the early 20th century folklore researcher should have equipped themselves, you might omit the Preface and the first part of the Introduction. The second part of the Introduction gives some very sensible and always appropriate recording advice: write things down, possibly in different colours for easy reference; enquiry should be methodical; indirect questioning works better than direct, and good manners should always be observed toward informants. Even ‘savages’. In the light of her times, Ms Burne is extraordinarily advanced in her approach to recording and her attitudes to data collection. In the light of our times there is still the entitled Imperialist overtone to contend with, and that can make uneasy reading.

The most rewarding parts of the book, for the modern reader, are those covering European and UK practices and beliefs. No-one gets called ‘a primitive race’, at least, not directly, and because, in many cases, Ms Burne is the main writer, the flow is swift and to the point. She covers magic and divination; superstitions regarding the treatment of infants; the (to us) extraordinary antipathy to an ‘unchurched’ new mother, still prevalent in places in England in the early 20th century; the provision of ritually ‘killed’ grave goods, again England in the early 20th century. The anecdotal examples of practices to be considered and recorded in detail are fascinating. Ms Burne never ceases to repeat the necessity for complete and accurate recording: ‘the fuller the details supplied, the more welcome will the record be to the scientific world’. It was here, in the chapter dealing with ‘Things made by Man’ that I came across the brief and inadequate record of a phenomenon completely new to me: South Wales Vampire Furniture. Ms Burne quotes almost verbatim from a report produced in 1909 by Marie Trevelyan, a published Welsh folklorist, who states in her own introduction (I looked it up; how could anyone resist?) that it was not her purpose to ‘trace it [Welsh Folklore] back to its original source..’. Having spent a few days in company with Ms Burne by now, I could almost hear her shrieking ‘But why not?!’ The items of furniture appear to have been 16th or 17th century, the stories concern three different locations, and involve one bed and two chairs (or possibly one chair with a highly developed afterlife – Ms Trevelyan’s account is inconclusive). One incident may be Georgian, one in the 1840s and one the 1850s. It is a chatty account, and all the interesting questions are left hanging in pursuit of a good yarn. Suddenly Ms Burne, grumpy and intolerant, seems a far finer reporter than her contemporary.

In conclusion, Charlotte Sophia Burne’s Handbook of Folklore is worth a conditional recommendation. She was, inevitably, a writer of her time, and that can make an unfortunate impression. She was, however, an intelligent and determined person, who demonstrated considerable skill in compiling and documenting her research. In practical respects, she was well ahead of her time; her methodology and recommendations for data gathering and recording are still relevant (and entirely applicable to anyone starting out in the field of graffiti recording), only the equipment available has changed and improved, along with, one hopes, attitudes to other nations and social groups. 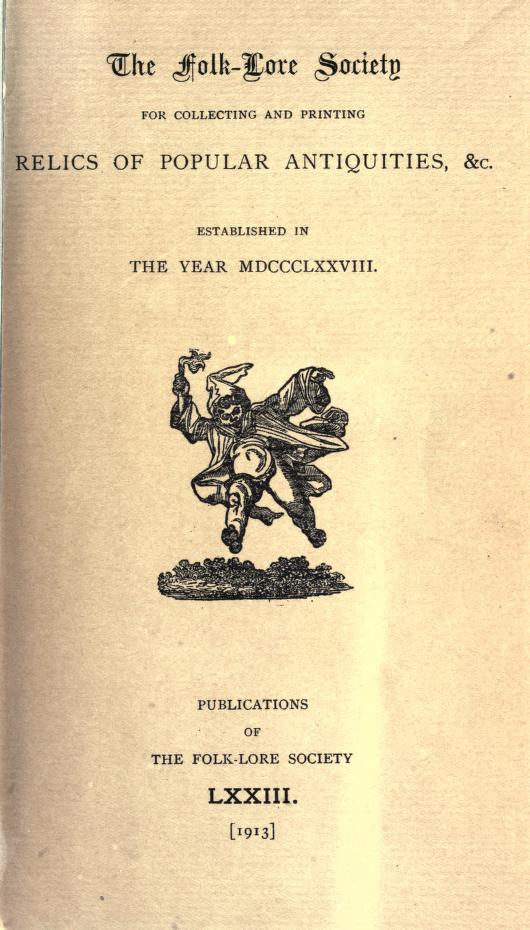 Frontispiece of 1913 volume of Folklore, containing the revised handbook.