The Decline of Magic: Britain in the Enlightenment

The Decline of Magic: Britain in the Enlightenment 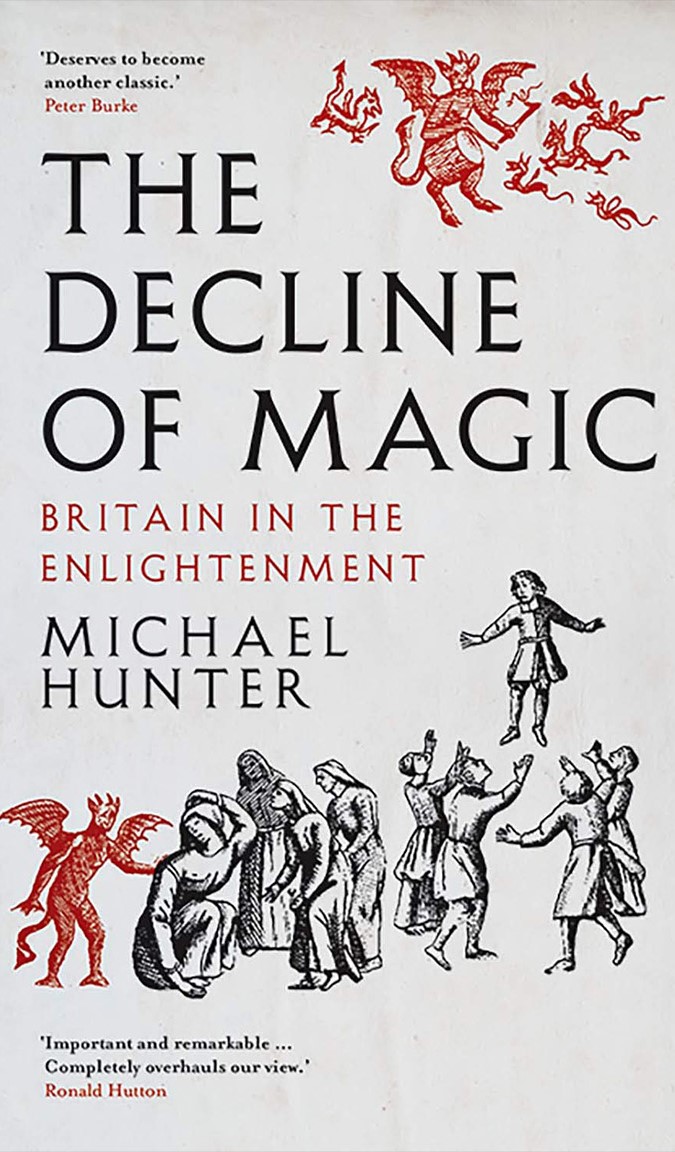 The English Protestant faith, having outlawed Catholicism and banned all forms of ‘Superstititious’ Catholic practices, apparently found itself in the latter part of the 17th  century in a spot of bother with the freethinkers. Beleagured by controversies and with declining judicial influence, by the late 17th century the Church felt threatened on many fronts, and the increasing scepticism of the public and the erratic but persistent decline of belief struck at the root of established Anglicanism.

In a series of essays Michael Hunter analyses the events of a brief period of less than 100 years during which the established church found itself challenged on many sides, and during which magical practices, while covertly supported by many clerics in an effort to revive any belief in the supernatural, gradually began to fade from daily life. The collection provides a corollary to Keith Thomas’s 1971 classic Religion and the Decline of Magic, which Hunter feels failed to explore the issue as far as it might and instead concentrated so much on demonstrating the enduring belief in magic, and the range of magical practices still flourishing in 18th century England, that it failed to account for much decline at all. Hunter’s new analysis, almost forensic in its detail, reveals an intricate and complex web of interactions, publications, beliefs and counter beliefs working at many levels right across society.

For those of us brought up with the simplistic, straight-line-with-occasional-reversals history of the English Reformation and the subsequent evolution of no-nonsense English Protestantism this book will also provide an intriguing insight into a brief spell of enthusiasm for a return to ‘superstitious nonsense’.

The crux of the study is the issue of the non-linear decline of spiritual belief in general and of magic in particular, and the fact that though the enlightenment encouraged rational thought many individuals were still very much bound up in the older beliefs, whether they expressed those beliefs or not. An interesting example cites the activities of the early Royal Society, often credited with testing magic and finding it wanting, who in fact dodged the issue because it was too contentious and the members’ views too divided.  It is this complicated relationship that makes a definitive cause for the decline of belief in the supernatural hard to pinpoint. There was a decline; it was variable and it was not solely the result of one event or one philosophical change.

This is a serious, densely written text, and not one that it is possible to dip into for random entertainment. The interest for the general graffiti hunter is limited. However, there is one point to be borne in mind: the freethinkers were a social group perceived as a serious threat to the established church and the church reacted by allowing and even quietly encouraging formerly forbidden practices.

Freethinkers represented the Atheist threat to all belief. Verbal statements of atheism had become part of the stock of witty conversationalists; the frequenters of coffee shops and fashionable salons and though difficult to quantify, were widely recorded.

Fashionable conversationalists, however, did not represent the solid, largely rural, population that provided the bulk of support to traditional Anglicanism. Catholicism had (of course) been riddled with magicks and other foolishness, but the challenge first of non-conformist sects, who felt that even the limited charms of hard line Anglicanism were excessive, followed in due course by an increase in freethinking philosophers, who felt that even God could be removed from the equation, was a serious concern. Church attendance might be affected; obedience to Church and Monarchy might be undermined; belief itself was under threat from this so-called ‘enlightenment’.

The upshot is that there appears to have been a definite increase in the tolerance of the use among the humbler parishoners of what had previously been regarded as the intolerable superstitions of ‘priestcaft’ i.e. practices associated (or considered to be associated) with Catholicism. It thus seems entirely likely that the inscribing of apotropaic graffiti, once accepted so widely in the Catholic medieval churches, was once more looked upon, if not precisely with favour, at least with the view that it represented some form of Christian belief, which was better than no belief at all. The graffiti hunter encountering some apparently anomalous flourishing of graffiti in an 18th century context could well be seeing an example of this reaction.

The Decline of Magic: Britain in the Enlightenment, Michael Hunter

Or for loan from numerous academic libraries via JISC library hub