The Church of St Thomas the Martyr, Bristol

The Church of St Thomas the Martyr, Bristol

This beautiful late 18th century church is built on the site of a former medieval church demolished in around 1790 when it was deemed to be in an unsafe condition. The current church was designed in 1789 by local architect James Allen. The 15th century west tower of the old church was retained and the top of the tower was later remodelled in 1896-7. The church is now in the care of The Churches Conservation Trust. The church is a designated Grade II* listed building.

The interior of the building is white painted and no graffiti is visible on the walls or on the pews, however one of the side panels of the organ does contain an intriguing collection of graffiti and some possible ritual protection marks, along with two charming drawing, one of which appears to be a cartoon of a child and the other is of an elderly woman in a hat. The panel is approximately 2 metres above the floor of the church, on the left hand side of the organ (when facing it). The following can be seen: I, IW, RI (with the I on the crossed style), A Webber, V, WS 1773 (with the W in the style of a Marian mark), RA 1773 (with the A in the Masonic style, with the interesting addition of two downstrokes that appear to turn it into a combined A & M. Beneath that is a combined WM, a possible Marian mark (there is no associated date), although initials is probably more likely. Underneath this are the initials MY and a date, 1771. The cartoon drawing of the old woman in the hat is to the left of the main graffiti panel and is located on the edging strip.

The organ was originally built by John Harris in 1728 and, according to Wikipedia, is said to have attracted the admiration of Handel. It was retained from the old church and re-erected at the west end of the new church. The cost of the organ and the case was £360. The dated marks predate the move of the organ to the new church and it seems reasonable to assume that all the marks on the panel might well have been done before the organ was moved. 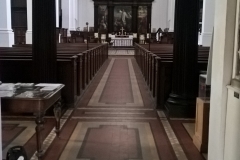 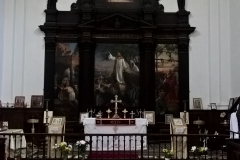 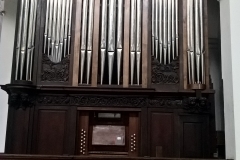 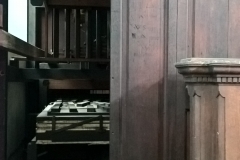 Side panel of the organ 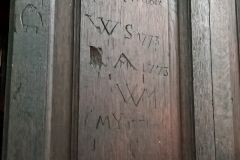 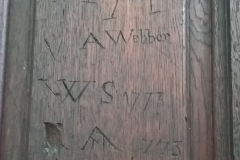 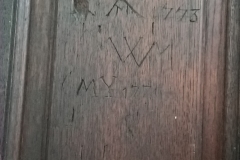 The church is open Monday – Friday from 10am – 4pm. Further details can be found here.

Report by Linda Wilson, with grateful thanks to Ed McGregor of the Churches Conservation Trust for drawing the graffiti on the organ to my attention.