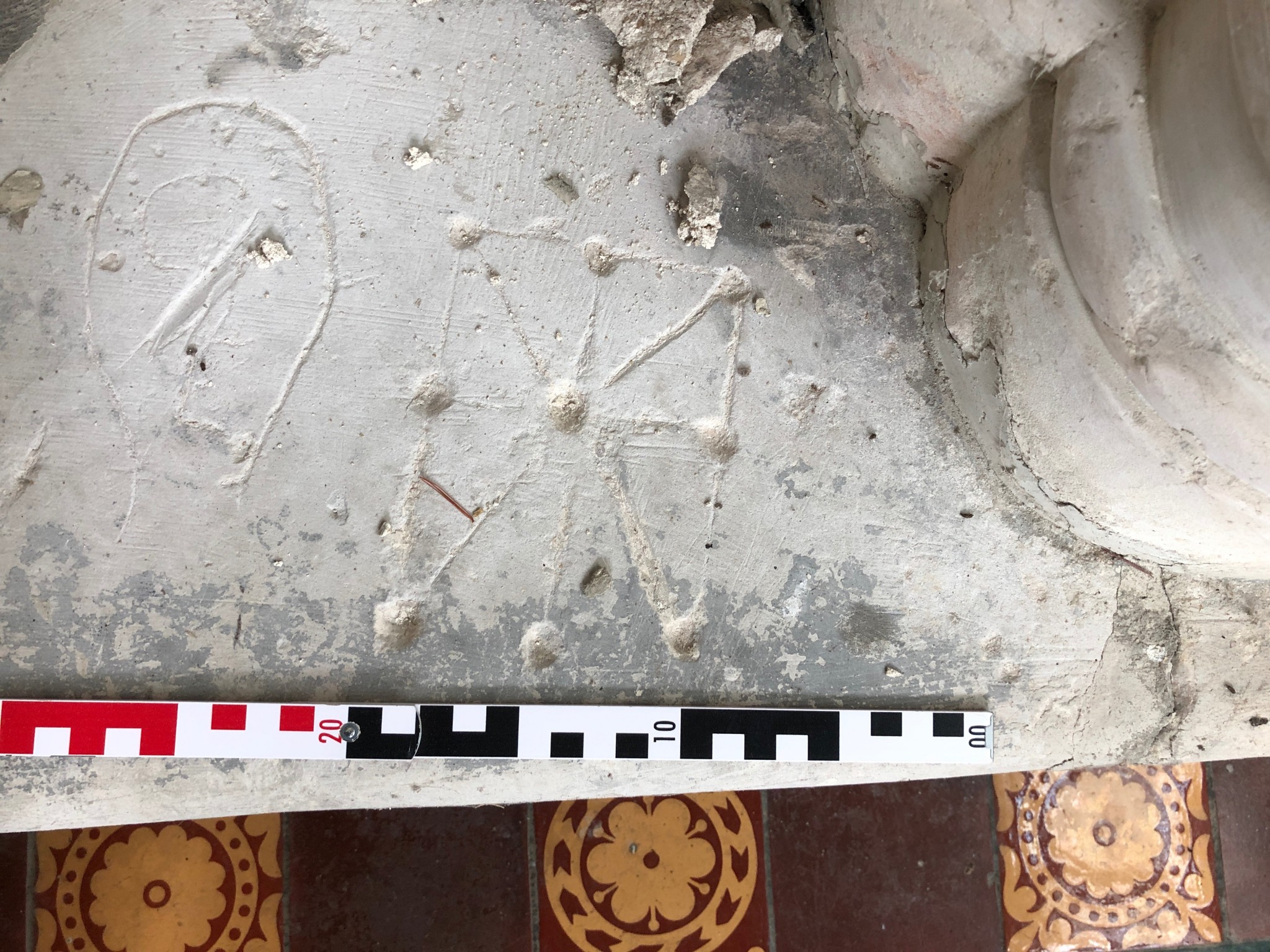 This is the third and last post about St Michael, Great Sampford. The chancel has 26 seats set in stone bays. The Historic England listing states that they were said to have seated a Knight Hospitaller who were supposed to have built the church.

The most prominent graffiti in the chancel are the merels. There are several sets showing the Three Men’s Morris layout. Three are complete and a couple show why the game was also sometimes known as Nine Holes. All of the merels are horizontal, are located on the seats of the chancel and are big enough to have been used as games rather than symbols.

Choir and seats
On the stone seats of the chancel there are several foot or shoe outlines. These are possibly a statement of identity, as much a sign of ‘I was here’ as a set of initials. One thing to note is that these shoe outlines are small, most barely making 20cm. The average male shoe size today is nine, coming in at 26.7cm. It is possible that these outline were drawn free hand rather than traced round an actual foot.

Shoe outline
I only found a few examples of circles, but there is a good collection of Marian marks, mostly M’s.

Circles (compass drawn) (interlocking)
If there are not many circles in the chancel, their lack is made up by the multitude of crosses on the columns and seat backs.

Crosses
Beyond the protective marks and crosses, there are few devotional types of graffiti present but there is a very clear INRI on one of the seat backs. There are also several examples of dot patterns, a design of oak leaves and some rectangles.

B, dot pattern
The chancel holds several sets of scored lines both vertical and horizontal, which defy symbolic or decorative explanation. There are also several holes which I have separated from the dot pattern graffiti as being much deeper and more singular than the normal dots. There are also two instances of deeply carved parallel lines on the chancel seats. These look deliberately carved rather than scratched as graffiti and could possibly be the remnant of old ecclesiastical fittings or equipment now long gone.

Grid marks, holes
There are plenty of initials in the chancel. It’s tempting to think that they all belong to the people who occupied the seats, however there is enough tourist graffiti in the rest of the church to mean that this probably isn’t the case. Having said that, in some seats, the same initials are repeated which does imply the same person returned there even if we’re not sure that they owned that particular place. There are some tempting ’16’s in the graffiti, but the earliest definite date belongs to the 18th century.

A, TA, other marks

P, I, other marks

IP, AT, other marks
Report by Anthea Hawdon

The church is usually open within daylight hours.