In Devon, where Michael is among the more popular pre-Reformation church dedications, there seems to be a slight case of split personality: a good many are indeed on high ground, or at least ground with a commanding view, but a proportion are on the coast, with a preference for river mouths and estuaries. The solution as to why the low-lying sites have been favoured with such a high-flying dedication may well lie partly in Michael’s role as a protector of doorways and entrances, and also that in the far west he has also been regarded as an important protector of mariners – local sailors allegedly having been the first to witness his appearance on St Michael’s Mount.

Possibly the most spectacular church location in England and certainly one of the most photographed, St Michael de Rupe (rupe meaning rock) perches on the remains of a volcano, high above the western edge of Dartmoor, about 5 km north of Tavistock. The Church of England website, A Church Near You, states: ‘St Michael de Rupe is the parish church of Brentor. Located at 1100 feet on the top of Brent Tor, it is one of the highest working churches in England. Regular services are held from Easter to Michaelmas (the end of September), and occasional services throughout the winter. However, the church is always open’. Currently they are saving up for a new roof, because the old one is suffering from the weather. I was really not surprised to hear it. According to Historic England: ‘Brentor church is built on the summit of a tor which is surrounded by probably iron age earthworks. The first church on the site was built circa 1130 by Robert Giffard, Lord of the Manor of Lamerton, and may have been built as a chantry chapel’. The current building is probably thirteenth century, with much subsequent rebuilding.

The approach to Brentor is steep and narrow and doubtless if one were a pilgrim it would be a satisfyingly steep and narrow way. If one is less than fit and the wind is blowing it is an interesting clamber. The views from the top are truly spectacular and make the whole climb worthwhile. 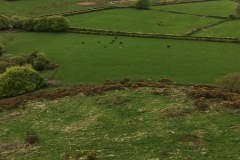 In terms of historic graffiti there seems to be only a small amount, reserved for the occasional block of local siltstone that has found its way in among the generally volcanic and granitic fabric of the building. Modern life, has however provided a newer form of graffiti: the rafters inside the comparatively new porch roof have been neatly signed in multi-coloured pen by dozens of recent visitors. 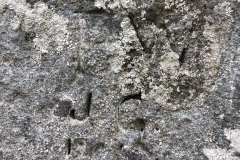 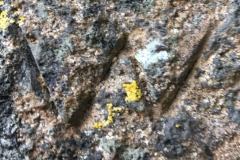 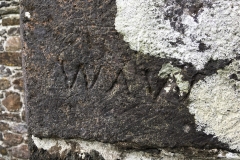 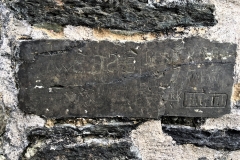 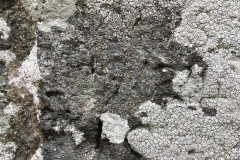