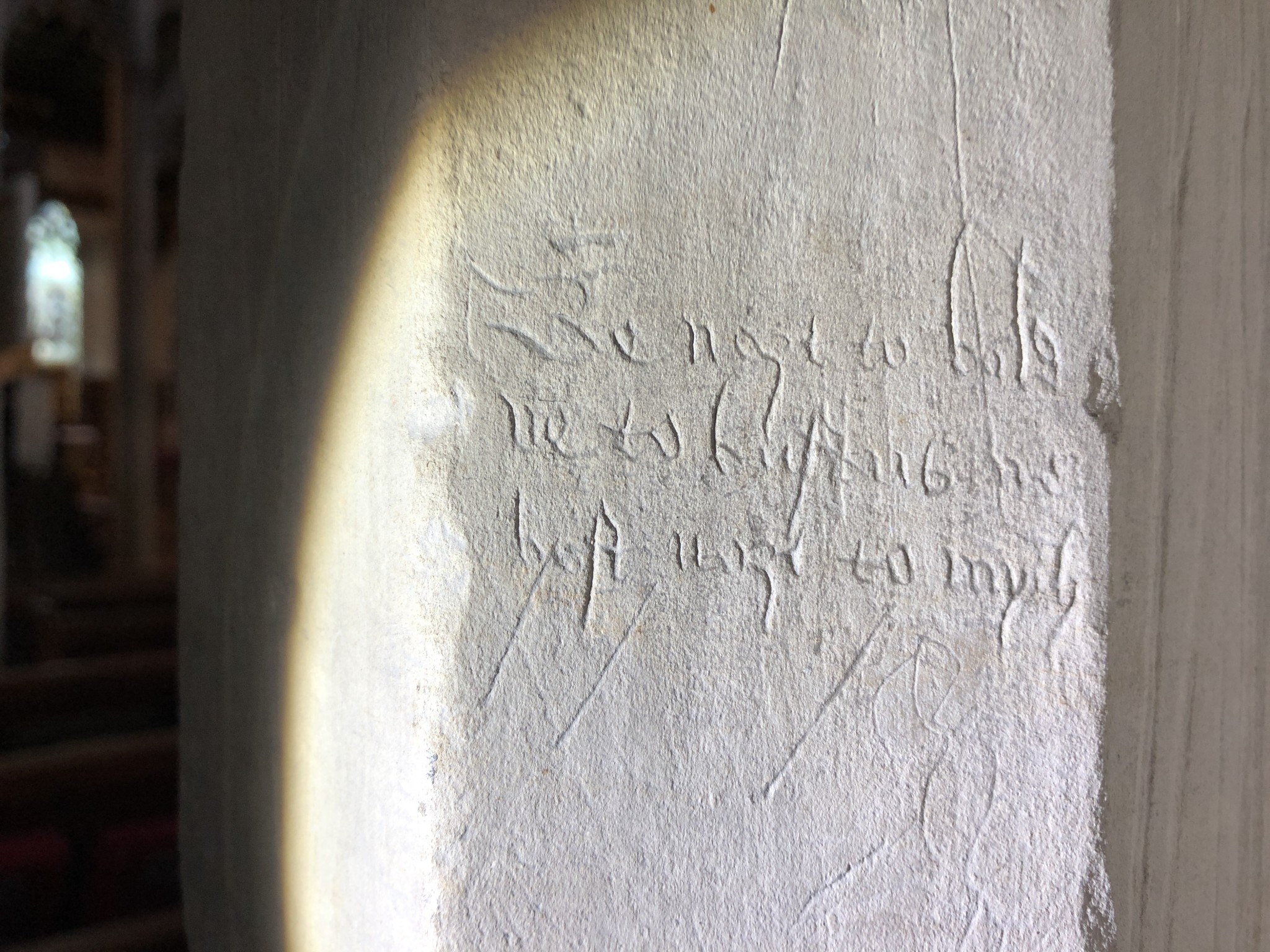 The church of St Mary the Virgin, Great Bardfield dates back to the 12th century. It is noted for its stone rood screen, one of only three in Europe. The screen has two angels facing out towards the nave and two demons facing in towards the chancel. Local legend has it that this was down to a payment dispute between the stone mason and the priest at the time!

Rood screen demon
The church is also famous for having the largest church clock in England.

Largest church clock in England
We were told, on entering St Mary’s about the ‘medieval writing’. And, indeed, there is plenty of it on the columns of the church. The most prominent example is a proverb on a column in the north arcade. This was transcribed by the historian GG Coulton last century as ‘Be noght to bold, Be to bussi[ness], Best noght to mych’. Words to live by.

Be noght to bold
That obscure proverb might be the most prominent piece of script, it is not alone. There are some columns covered in so much writing that it looks like someone was taking extensive notes during sermons!

Script, other marks
A prominent and distinctive mason’s mark is visible on several columns throughout the church.

Mason's mark
Thanks to the Union Jack, there can be a certain amount of debate as to whether any given graffiti design is a merel or a flag. St Mary’s has plenty of both. These are the flags. They are mostly found on the pew sides of nave columns.

Flag design
While there are far more flags than merels in the church, there is a handful of them. They are mostly of the Three Men’s Morris type, some with clear holes in the corners to indicate the game’s other name of Nine Holes.

Merel
If the church is poor in merels, it is rich in dot patterns, some of which have lines joining the dots in ways that mimic some merel types.

Cross in square, dot pattern
St Mary’s church is not overburdened with protective and devotional marks, but it does cover the main categories apart from Marian marks, with compass circles, pentagrams, butterfly crosses, grids and cross hatching along with a few crosses.

Quatrefoil (compass drawn)
The rest of the symbols in the church include interesting entwined vines with a look of DNA double-helix about them, heraldic shields and a possible heraldic lozenge which would indicate the arms of a noblewoman rather than a nobleman.

Heraldic lozenge
The tourist graffiti includes two examples of modern ‘I woz ‘ere’ cliche graffiti, both from the 1960s. There is a date which could be 1502 or 1602. If it is 1502 then it is a very early one for Arabic numerals.

MI, B, other marks

Many thanks to Rev Dr Robert Beaken, who took the time out of a busy Easter weekend to show two graffiti enthusiasts round his beautiful church and answered our many questions with kindness and good humour.

The church is not normally open. Please contact the church to arrange for a keyholder to open it.