Construction of the church of St Mary the Virgin at Alveley commenced around c 1140, likely to have been on the site of an earlier structure. It sits on an eastern ridge about three quarters of a mile from the River Severn in south-east Shropshire. The name Alveley is derived from Old English meaning the ‘woodland clearing of a woman called Ælfyth’ reflective of a time when the area was dotted with small settlements, part of the great hunting Forest of Morfe. After the conquest William gave these lands, along with the rest of Shropshire, to his ally Roger of Montgomery who built a castle upstream at nearby Quatford near a strategic river crossing.

In the 12th century Henry II gave Alveley to Guy le Strange who was to become Sheriff of Shropshire. It is likely that Guy had the church built in a manner to show off his status and success. However, a century later, a new chancel was built replacing earlier 12th century stonework. Exceptional pieces of 12th century masonry in the Romanesque style (such as that at Kilpeck, Herefordshire) have been discovered locally in the structure of a former 16th century inn next to the church, now a private residence.

Archaeological surveys conclude that the masonry came from demolition during one of the church’s many redevelopments, later installed into a 13th century ‘hall-house’ before being reused three hundred years later in the fabric of the inn.

The church had further notable additions in the 14th/15th centuries including a 14th century wall painting believed to be a depiction of the seven deadly sins. There are dates and initials from the 18th and 19th centuries carved into some of the stones.

Despite heavy restorations in the 19th century the church still retains some of its earlier richness and drama.

There are a number of examples of stone scrapings on the south exterior walls. The walls on either side of the lychgate have notable marks along the coping stones said to be a result of weapon sharpening by Parliamentary soldiers during the English Civil War. However, this popular explanation for such marks has largely been debunked. See Medieval Mythbusting Blog #10: Arrow Stones by James Wright of Triskele Heritage for further details. 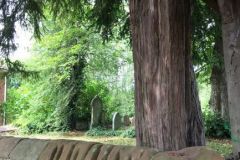 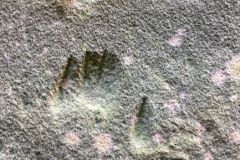 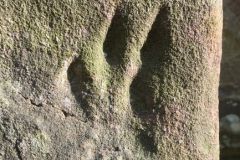 Stone scrapings
The east wall has graffiti said to have been left by Parliamentarians during the English Civil War. Local folklore relates how Cromwell and his soldiers spent a night in St Mary’s on their way to Bridgnorth. A different account says they stayed at the inn. Either way Cromwell was not with them as he never came to Shropshire but it is known that a group of Parliamentarians did encounter a unit of the King’s men near Alveley, killing twenty and capturing their leader. The place where they fought is still known as the Bloody Field.

The Battle of Bridgnorth took place only a few miles from here in 1646. The town was kept under siege by Parliamentary forces for 26 days. Such events inevitably left their marks upon the landscape and surviving buildings but are difficult to date.

This account relates only to a selection of the exterior marks as the interior could not be visited due to covid restrictions.