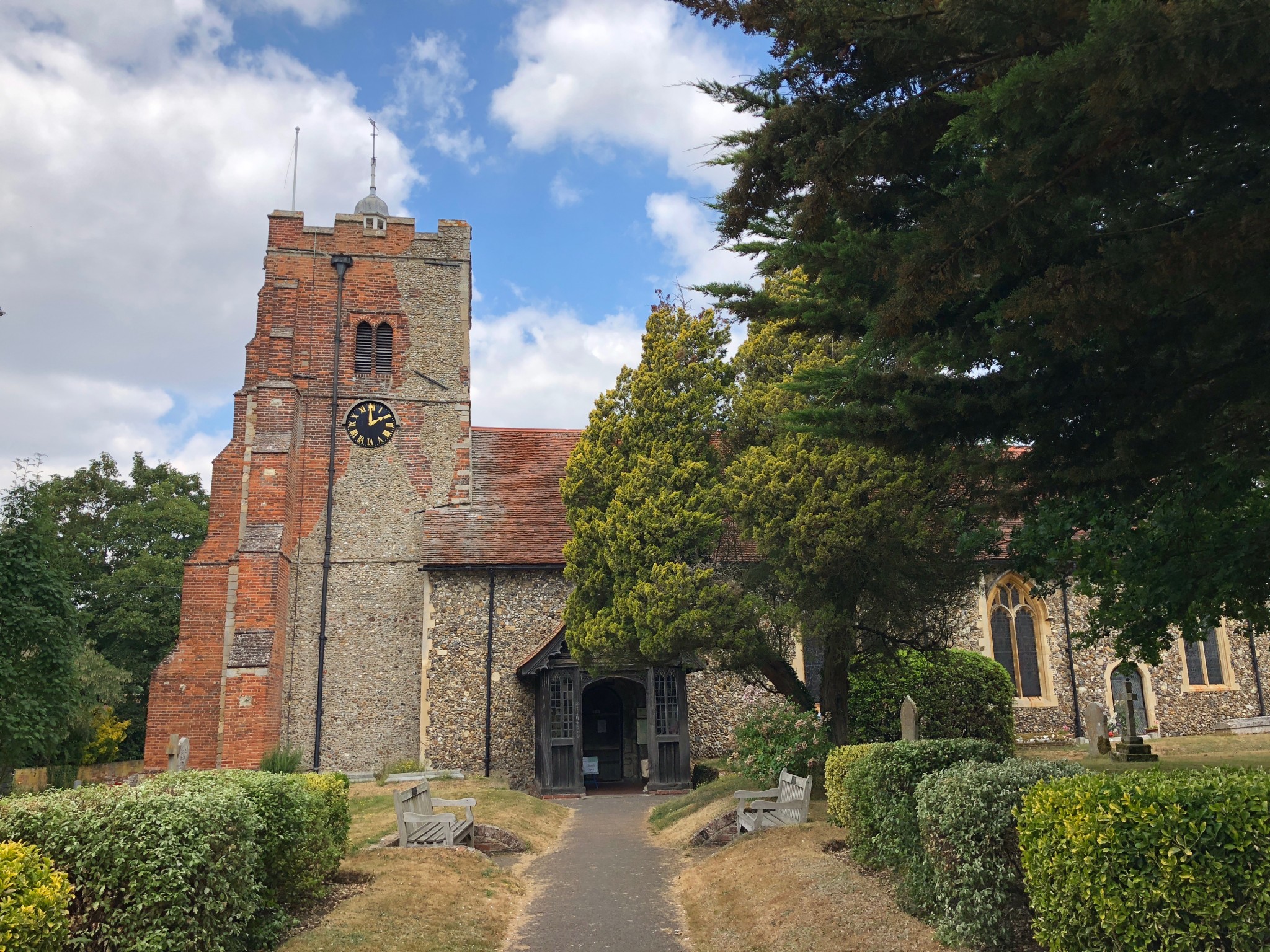 The church of St Martin at Little Waltham dates back to the Normans, but was rebuilt extensively in the 15th century. There is no graffiti visible anywhere in the church, but some if to be found on the north side of the tower arch. There, divided by a modern partition and door, are a collection of inscriptions, faint ships, a partial figure and knots of various kinds.
Violet Pritchard visited St Martin and in her book ‘English Medieval Graffiti’ she made special note of the swastika-peltae or Solomon’s knots. There are also some examples of where a swastika pelta was attempted and then abandoned. There is also a figure of eight design, for which Pritchard finds parallels in ancient Egypt pottery (among others). Unfortunately the whole design that Pritchard pictured is no longer visible.

Swastika pelta
The last of Pritchard’s rubbings include a swastika cross, which is also seen in a church in  Sutton, Bedfordshire, which will be included in a future report on this website.

Swastika cross
To end the list of Pritchard’s graffiti are two ships: “Further down on the same wall there are two one-masted ships, but the stone is in such bad condition that a satisfactory rubbing could not be made.” One is still visible. The other stone may contain the one that Pritchard spoke of, but nothing clear can now be made out.

Single masted boat, other marks
Pritchard also mentions parallel lines and a five-dot dice face. There is no sign of them today.
There are some examples of knotwork and failed attempts at swastika-peltae that Pritchard did not include. The last example is worked in a curious double-dotted-line style. There are other lines wanderings around that particular stone done in that style, but the knotwork rectangle (right at floor level) only identifiable shape in worked like that in the panel.

Knotwork rectangle
A curious shape that appears twice is one made up of intertwined triangles. It is like the Star of David, only the points of the triangles do not protrude past the horizontal lines of the shape. One of these is worked in the double-dotted-line technique like the above knotwork rectangle.

RS, interlinked triangles, Marian mark, M
There is a small wheel design and a what looks like to be a small figure above it. At least the feet, legs and trunk hose are clear if the shoulders and head are missing.

Hand-drawn wheel, possible figure
There is a scattering of Marian marks and some cross-hatching.

Marian mark, M
There is one legible name, several pieces of faint or fragmentary script and the usual complement of various initials.

SR, other marks
I would like to express my thanks to the churchwarden and other parishioners who were very helpful in allowing me to take photos behind the usually locked screen and delay their locking up of the church after Sunday service.
Report by Anthea Hawdon.
St Martin
Wheelers Hill West
Little Waltham
Chelmsford
CM3 3LJ
The church is normally open during daylight hours. There is street parking outside on Wheelers Hill.