The 12th century church of St Catherine at Tugford was built in the lea of an old coppice amongst in the Clee Hills of Shropshire. The Tugford Brook runs next to the church, once the heart of the village, and was where a mill operated for at least a thousand years. 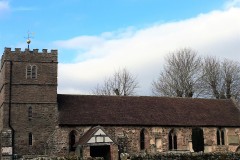 St Catherine's
The church has a few surviving Romanesque features despite restorative work over the centuries. The medieval nave has been recently lime washed. The exterior arch of the 12th century south doorway is decorated with lozenge shapes. On the interior of this door are two well worn sheela na gigs on either side.

There are a number of‘W’s and several sets of notches carved into the rear pews. The letter W is also scratched into woodwork upstairs. 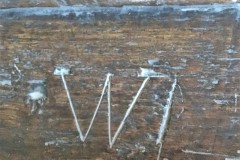 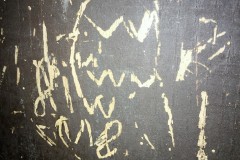 Scratch marks
At the west end of the church is a gallery. Church galleries, popular from the 17th century onwards, were built for musicians or singers to perform from. By the 19th century, the organ was becoming more popular and such galleries fell out of use. The gallery at Tugford is said to have been made from the medieval rood screen. 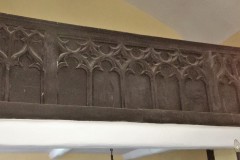 West Gallery
In this gallery is a short wooden screen separating benches and a 17th century bier. Part of the screen is covered with several marks and apparent random scratches. On closer inspection, a few may be identified as deliberate designs. There are also a number of ridges on one of the benches in the same style as those on the downstairs pews. 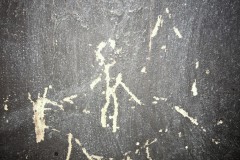 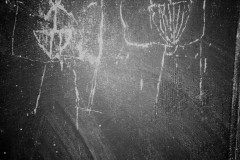 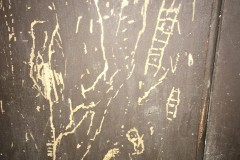 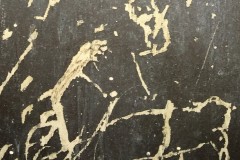 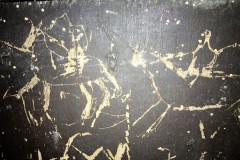