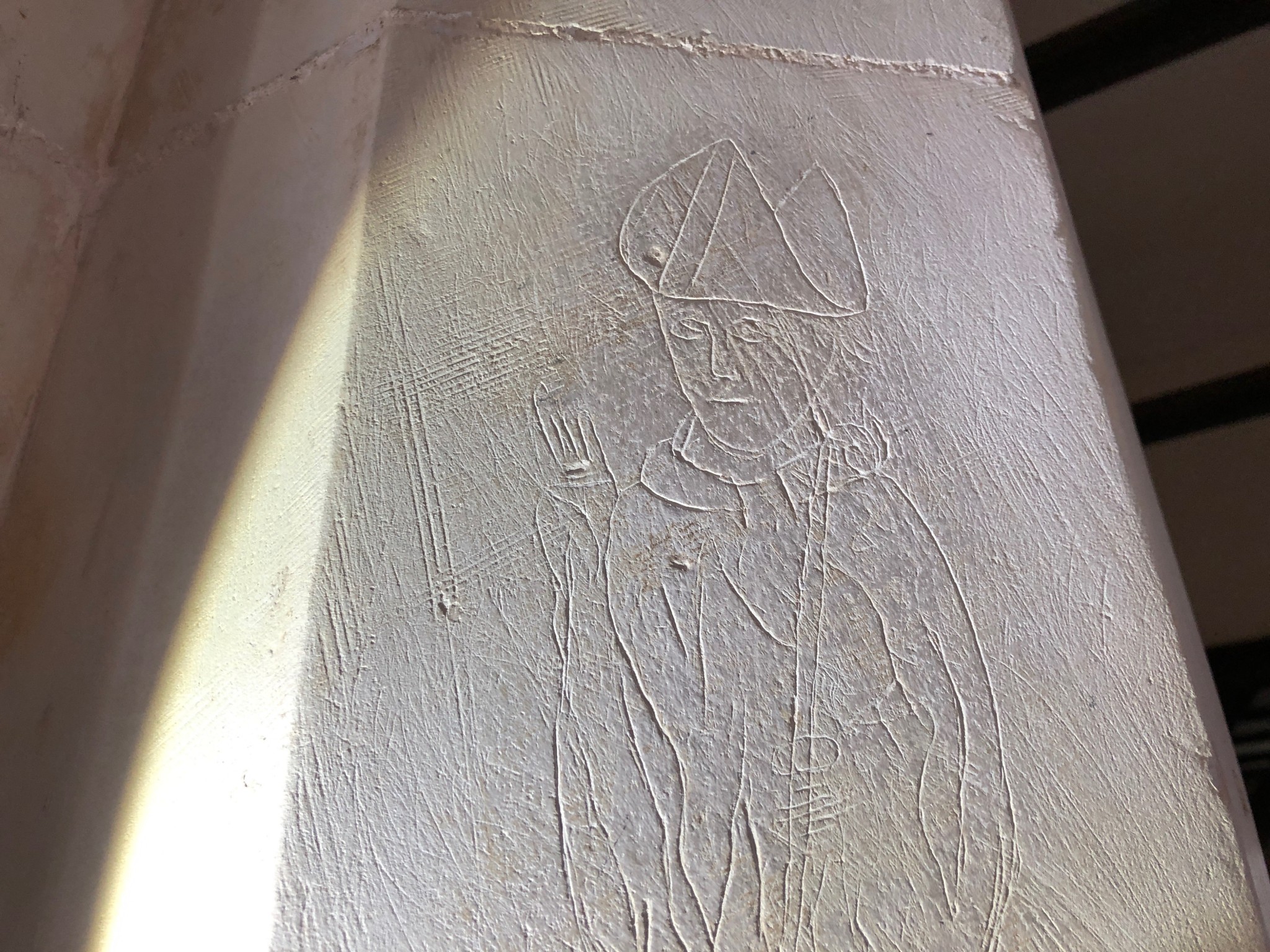 St Andrew’s church shares a churchyard with St Christopher’s church. St Andrew’s (full name St Andrew and All Saints) was the church for the parish of Willingale Spain as opposed to the parish of Willingale Doe which had St Christopher’s as its church. St Andrew’s was given to the Priory of St Lawrence in the 12th century and it stayed under the control of monasteries until their dissolution. The church was used as a parish church for the Willingale airbase and a memorial to the USAAF is in the church as well as graffiti relating to it. The church is now in the care of the Church’s Conservation Trust.

USAAF display
Most churches would be happy to have one graffiti sketch of a bishop on its walls, St Andrew’s has two, or two and a half if you include faint head of one. They are on the south chancel arch and the south chancel window. While not necessarily the work of a professional artist, both drawings are clearly done by someone who knew how to draw.

Bishop
There are several protective marks in the church, mostly pentagrams and possible Marian marks. The greatest concentration is on the windowsill of the north chancel window.

Pentagram
As was said before, this church was the ‘parish church’ for the USAAF 387th Bombardment group from 1943 to 1944. They flew out of RAF Chipping Ongar which was only a few fields away from St Andrews’s. One of the aircrew has left his mark. ‘MD’ not only inscribed his initials, but the badge, ‘V’ for victory and ‘. . . -‘ the morse code for ‘VE’, Victory in Europe. Underneath that graffiti is one from ‘DP’ in the Royal Army Service Corps in 1958. That is the year RAF Chipping Ongar was demolished.

MD, 1944, USAAFF, badge, V, morse VE, DP, RASC, 1958
The sedilia is where the clergy celebrating the mass sit in the chancel. They are often a good location for graffiti. You can frequently find names, crosses and other devotional symbols. In St Andrew’s you find crossbows. Lots and lots of crossbows. There are a dozen and more. One can only speculate as to why.

Crossbows, other marks, 8, A
St Andrew’s has several examples of script. One appears to contain a rebus which translated would be ‘my heart held’. There is also a large capital ‘S’ set amongst ruled lines that continue round the corner of the chancel arch.

Script, lines around corner
The rest of the graffiti in the church is mostly names and initials. The dates of these are from the 18th and 19th centuries.

The church is open daily from 10am to 4pm.