Skull and Crossbones Hole in Mackhouse Wood Quarry, Thrupp, near Stroud was located earlier this year by members of the Gloucestershire Speleological Society. An alternative name is Mackhouse Wood no 2. 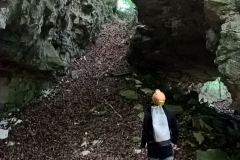 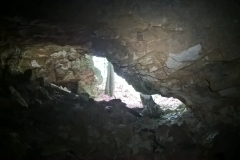 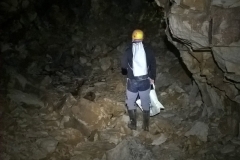 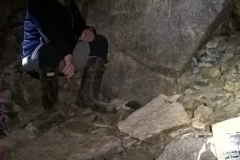 The mine contains a large slab of stone with a carved skull and crossbones, from which the mine takes its name. In addition there are numerous other initials and names. The bottom part of the slab has cracked away from the main block, and is also inscribed. 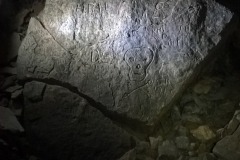 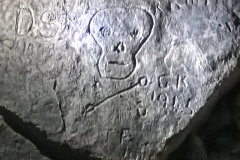 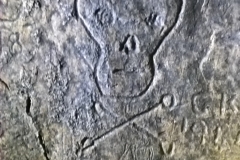 The mine is approximately 50 m in length, in a ‘H’ plan, with a visible slip rift in the roof of the main chamber, but no natural cave passage.  It appears to have had two entrances at one time. The inscribed slab is located under the now collapsed entrance. The mine appears to have been started for stone for local canal building in the mid 19th century, and there are remains of wire for an aerial haul way & a rusted kibble, used for moving stone. There is also barbed wire which may indicate use in WWII, although there is no local record of this.

The dates inscribed on the block are from 1945, 1947, 1948 and 1950. It is likely that the skull and crossbones was carved at the same time. There is a small skull, harder to make out, on the bottom left part o the slab and a partial skull in the top left corner. The names, with the exception of C Short, are difficult to make out with any certainty. The photos were taken on a mobile phone and a sketch of the block done underground has also been included.

Of additional interest is a hand-drawn eight-pointed star in a rough oval, and a W, by itself, close to the centre of the block, in the style of one the classic the Marian mark. 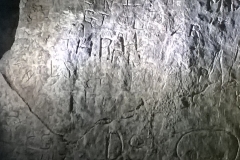 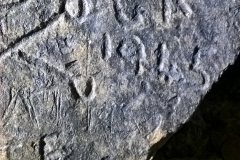 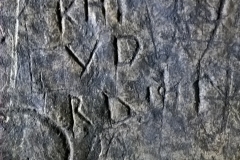 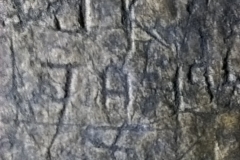 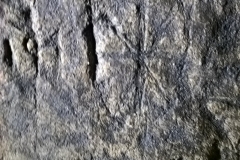 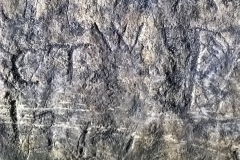 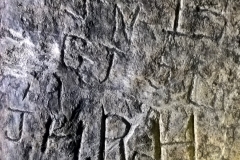 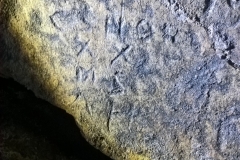 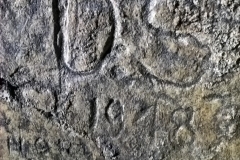 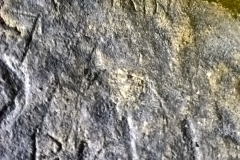 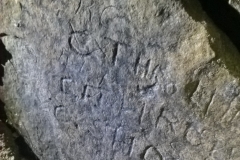 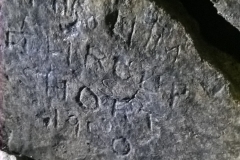 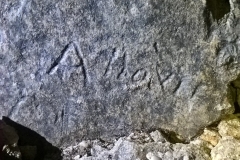 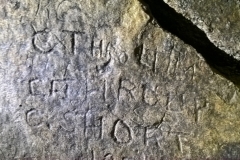 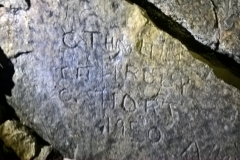 Names, C Short & others (close up) 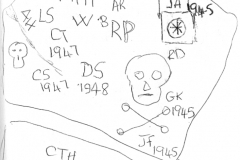 The passages are approximately 4 m high and 6 m wide in places, remaining roomy throughout.

There is no other visible graffiti in the mine and, apart from the entrance chamber, which has clearly been used for parties, there is very little rubbish.

Report by Linda Wilson, with thanks to Tony Boycott.