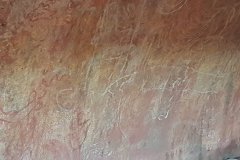 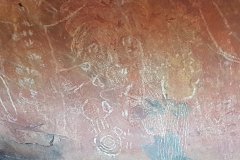 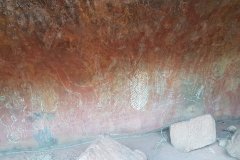 Uluru3
Our pictures this month are graffiti found by friend of the site, Sonia Hines, on her visit to Uluru (aka Ayres Rock), Northern Territory, Australia. She says this is graffiti, not rock art, and would have been done in the 1970s and 1980s when tourism around this sacred site was a lot less regulated than it is today.

Graffiti at a French Chateau

Ness of Brodgar stone with graffiti

Dutch road workers have an artistic way with dealing with dicks drawn on the road!

Bi-planes and an airship behind the organ at Catsfield church, E Sussex