Playing Games in a Cave

Cavers are used to seeing marks on cave walls, from calcite flows to mineral stains and all sorts of unusual pits and protuberances. Those found in a cave in Azerbaijan proved to have a different provenance. The markings are man-made and represent a game board similar to backgammon, but called Hounds and Jackals as was played in Egypt 4,000 years ago. It was identified in a photograph by an American researcher and the next day he flew to Azerbaijan to corroborate the discovery. The markings, he says, are too exact to be a coincidence, as some game holes are specific in their arrangement. The Gobustan National Park, a UNESCO World Heritage Site, contains some 6,000 rock carvings and covers and area of 400 hectares (Correspondent: Chris Howes of Descent Magazine.)

The tower of the Church of Holy Trinity and St Edmund dates to the 15h century but is sadly devoid of graffiti. The remainder of the church dates from the mid 19th century and has suffered from the Victorian love of neatness, but a solitary compass drawn circle was found halfway up the inside of a doorway that leads to the small kitchen in the church. On the outside is an equally solitary X, whilst an exterior door at the east end of the church contains some modern graffiti. 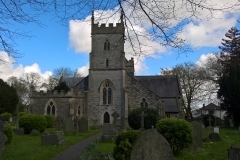 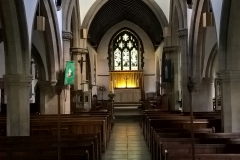 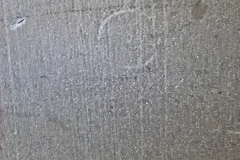 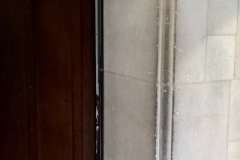 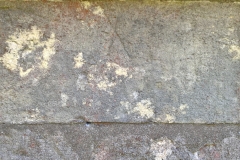 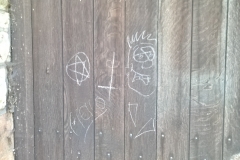 Rock graffiti in the Catalan Pyrenees and the linked article.

Tweets about graffiti in the Tower of London.

Hunting ritual protection marks and graffiti in a mine. Courtesy of Peter Burgess of the Wealden Cave and Mine Society

WWII graffiti in a pill box.