A visitor to Ashburton, approaching from the high ground of Dartmoor, might be forgiven for wondering why a small market town deserves two medieval churches with soaring Devon towers. The answer is simple, though it sounds as if it might be the start of a surreal pattern of riddling: one of them is not a church.

St Lawrence Tower was added to the much earlier Chapel of St Lawrence in the late 15 – early 16 century. The original chapel had been the private chapel of the Bishop of Exeter, attached to his house in the town. Built around the mid 13th century, when the town first became a Borough, by 1314 Bishop Stapledon seems to have had no further use for it. It was granted to the town, on condition that a chantry priest was appointed to pray for him and for all other Bishops of Exeter. For reasons unrecorded by Pevsner or Historic England, the town added a very fine large tower to the small chapel at the beginning of the sixteenth century. The parish church, St Andrew’s, which lies to the west along the high street by several hundred yards, has a large tower erected around 100 years earlier. The time delay seems to long for this to have been a case of medieval tower envy, but it may well reflect Ashburton’s growing importance as a wool town and the increasing power and influence of the Borough court, which met in the Chapel.

During the tenure of the chantry priest the chapel was also used as a grammar school, and, following the Reformation, when the chantry ceased, the school was retained. Around 1740 the chapel schoolroom was largely rebuilt, fitted out with a new doorway, windows and desks, and with a fine display of rococo plasterwork, celebrating its various benefactors. 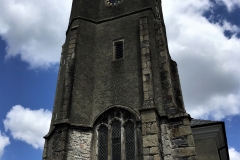 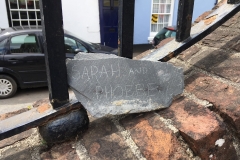 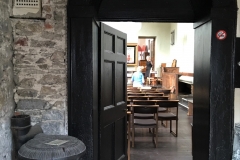 Door from tower into chapel / schoolroom 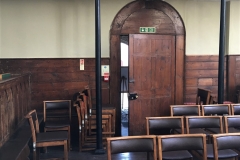 Door from chapel / schoolroom to tower 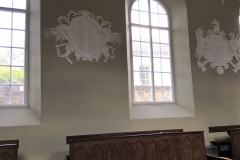 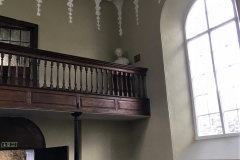 Despite subsequent extending and reworking, the chapel survived unchanged throughout the period of the school’s life – which ended only in 1983. Lovers of Sherlock Holmes may wish to note that not only was the original donated by Stapledon, but that the most notable of the headmasters was named Mortimer.

The widest class of graffito in St Lawrence is the schoolboy (and later schoolgirl) carving in the wooden benches, and, less frequently, on the boarded walls.

The entire surface of all the desks and benches is covered with names and initials, some so deeply (and neatly) carved that one wonders precisely how much time some of the students had on their hands. Mr Bartlett, in particular made a very fine job of a not insignificant length of name. 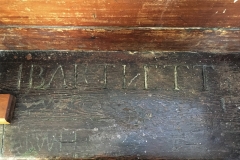 Bartlett, with WH and I 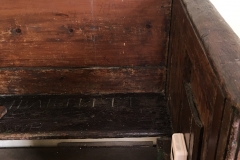 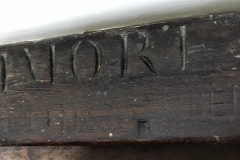 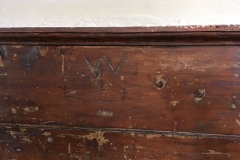 The most significant name carved on the benches is said to be that of the explorer, William John Wills, one of the first Europeans to explore the interior of Australia. The graffito is slight and wavering and not easy to find. 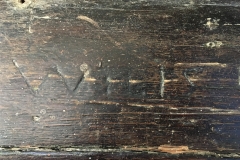 A more entertaining carving lies hidden under one of the desks, tucked out of sight, and appears to be a rendering of Tom Pearce’s grey mare complete with a selection of riders. Widecombe lies just to the northwest. 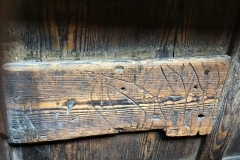 Three large and beautiful daisy wheels have been executed on a board on the panelling near to the inner west door, but appear on close inspection not to extend on to neighbouring boards. The building fabric was extensively restored in 1986-7, and while all the internal fittings were retained it is possible that the boards may not have been returned in precisely the original order. It is also of course possible that the boards were inscribed prior to installation in the 1740’s, but it is interesting that the location is adjacent to the one original exterior door in the room – which is where one would expect them for apotropaic purposes. 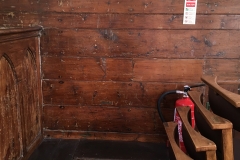 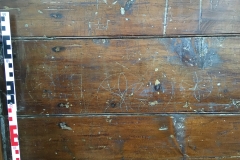 Daisy wheels adjacent to tower door, with crossed I, W

Opening Times:
The Chapel is open to the public at weekends from beginning of May to the end of September. It is owned and managed by the Guild of St. Lawrence.  See their web pages for precise opening times and events in the chapel.