At the Vernacular Architecture Group‘s excellent winter conference on the theme of Marks on Buildings, Bill Hardy gave a presentation entitled ‘Carpenters’ assembly marks in medieval buildings using Arabic numerals’. Bill is always on the look out for such marks and takes up the story here in the hope that this will lead to more examples being found.

I have pursued the subject of carpenters’ assembly marks in timber-framed buildings ever since I was involved in the restoration of an early 16th century barn as a sister church and community centre at Thorley, Hertfordshire. The discovery of over 100 Roman numeral carpenters’ assembly marks in our nine bay, twin aisled, wheat and barley barn led me to investigate other such marks in barns and farm buildings in East Hertfordshire and West Essex.

A chance reference to a different format of assembly marks on the massive roof trusses in King’s College Chapel, Cambridge led me to record two sequences of Arabic assembly marks in the third building phase of this magnificent building. Thanks to the extensive records at King’s College Archives, the name of the master carpenter, Richard Russell, with the building date range of 1508 – 1515, can be established.

Such sophisticated marks are rare, they always excite the finder and invariably feature in any historic building report. As an independent researcher and with the invaluable help of dendrochronologists and historic building consultants, I have been able to build a database of 25 instances of Arabic numerals used by carpenters as assembly marks in the construction of timber framed buildings in England.

Carpenters’ Marks, or more correctly Carpenters’ Assembly Marks, were marks made by master carpenters when locating joints on adjacent timbers prior to erecting timber-framed buildings.  Marks could be formed using a handy pointed tool, a chisel or a scribe/race knife.

By far the most common form of carpenters’ assembly marks found on timber-framed buildings are sequences based on Roman numerals – I’s, V’s and X’s. However, Dan Miles (Oxford Dendrochronology Laboratory) has identified sequences of Arabic (strictly speaking Hindu/Arabic) numbers, 1, 2, 3 etc, on a very small number of timber frames dating from the early 13th century [Miles, 2000]. A further study by the Wiltshire Dendrochronology Project [Lloyd, 2013)] identified a cluster of four 14th century buildings with Arabic numerals in an area of Somerset and Wiltshire. The common theme in these studies of Arabic numerals is that the timber framing was formed by ‘educated master carpenters’ with ecclesiastical, manorial or royal patronage. More care was required to form these Hindu/Arabic marks than the simple strokes needed for Roman numerals. The tool used was a metal scribe or race knife ‘rather like a two pronged fork, with one prong armed with a small, sharply curved blade that could gouge a curved line, while the other prong served as a compass point.’ [Pacey, 2005]. A variety of fixed radii were used.

Other isolated examples have been recorded in Lancashire, Cheshire and West Sussex [Pacey, 2005, 2007], plus a recent find in Herefordshire [James, 2018]. In all, only some 25 buildings with Arabic numerals have been recorded. In compiling a database of this historic method of numbering timbers, I have been able to add three buildings in Cambridge, Colchester and Durham.

A Selection of Arabic Assembly Marks 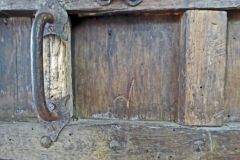 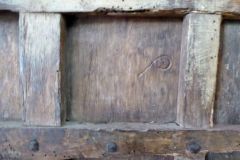 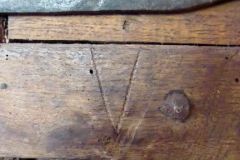 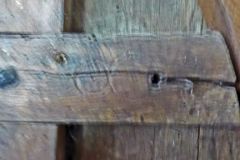 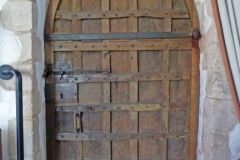 Irstead Church Norfolk South Door
There are surely more such marks to be found and if you come across any that might be Arabic assembly marks please send details of these sightings to me.