All Saints’ Church was built of limestone and cobbles between the 13th and 15th centuries. It stands on a slight rise in the ground above the village of Sutton. Perhaps fortunately, the interior has seen little by way of modernisation. 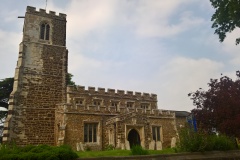 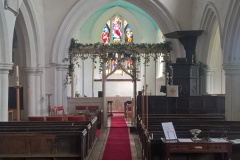 Interior looking east
Violet Pritchard, in her book English Medieval Graffiti, concentrates on only one graffito in the church, on a pillar on the north side of the nave, which she describes as ‘perhaps the most astonishing so far encountered.’ The figure is of a strange-looking individual with wild hair blown back from his head, a bristly beard on his chin and a sharp almost beak-like nose. His right arm is raised, with his hand outstretched, his left arm is lowered. There are patterns on both arms (or sleeves). The most remarkable aspect of the figure, though is the device on what Pritchard refers to as ‘the breastplate, or embroidered tunic … a known Celtic design’.

She goes on to say: “That the symbol is a debased descendent of the Scythian ornament called the “animal whirligig” – consisting of four horses’ heads – seems possible.’ She gives as a reference Early Celtic Art by Paul Jacobsthal [(Oxford, 1944), vol. 1, Pl. 239, fig, c.]. As Pritchard states, there seems to be no explanation for the appearance of this symbol in the church at Sutton. She also mentions the prehistoric appearances of the same symbol, quoting a curved swastika embossed on a gold button from Mycenae (1200 BC). She supposes that the symbol has importance in prehistory and that this ‘must have been understood as late as the medieval period.

What Pritchard doesn’t mention is another figure of a very similar appearance, but without the emblem on its chest. The clothing appears to be a short tunic with horizontal lines and the figure might have a sword on his right hip. It is hard to determine whether the ladder to the right of the figure is in association with it or not. The hair and the beard are strikingly similar to the previous figure.

A third figure in the church, also not mentioned by Pritchard, has a sword (or possibly a sword and dagger) in each hand, is wearing a tall helmet and appears to have a mail tunic. Interestingly, he is seen wielding what is definitely the sword in his left hand. The lines on the weapon in his right hand peter out inconclusively. This figure can be found on the western most pillar on the north side of the nave.

Other figures of note are a cluster of pentagrams around the base of a pillar on the south side of the nave, closest to the chancel. 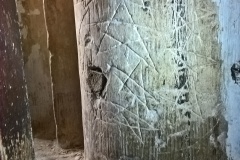 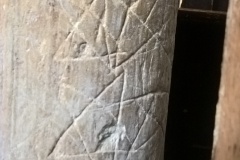 Pentagrams
There is a small amount of graffiti on the memorial to Sir John Burgoyne, who is lying at rest with a rather splendid faithful hound at his feet. Sir John was a member of Parliament from 1562 – 3. He died in 1604, one year after the death of Queen Elizabeth 1. The Burgoyne family were Lords of the Manor for over 300 years and are commemorated in many places in the church. 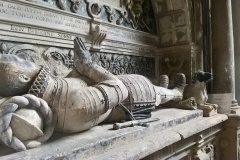 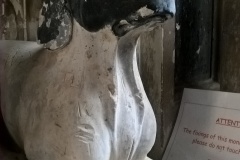 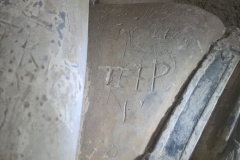 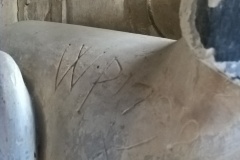 Initials, WP, 1798
The other main figure of note in the church is what appears to be an almost cartoonish woman’s face in profile.

There is on street parking near the church. Details of how to obtain a key are shown in the church porch.