A Fireplace lintel from a Farmhouse in Stokeinteignhead, Devon 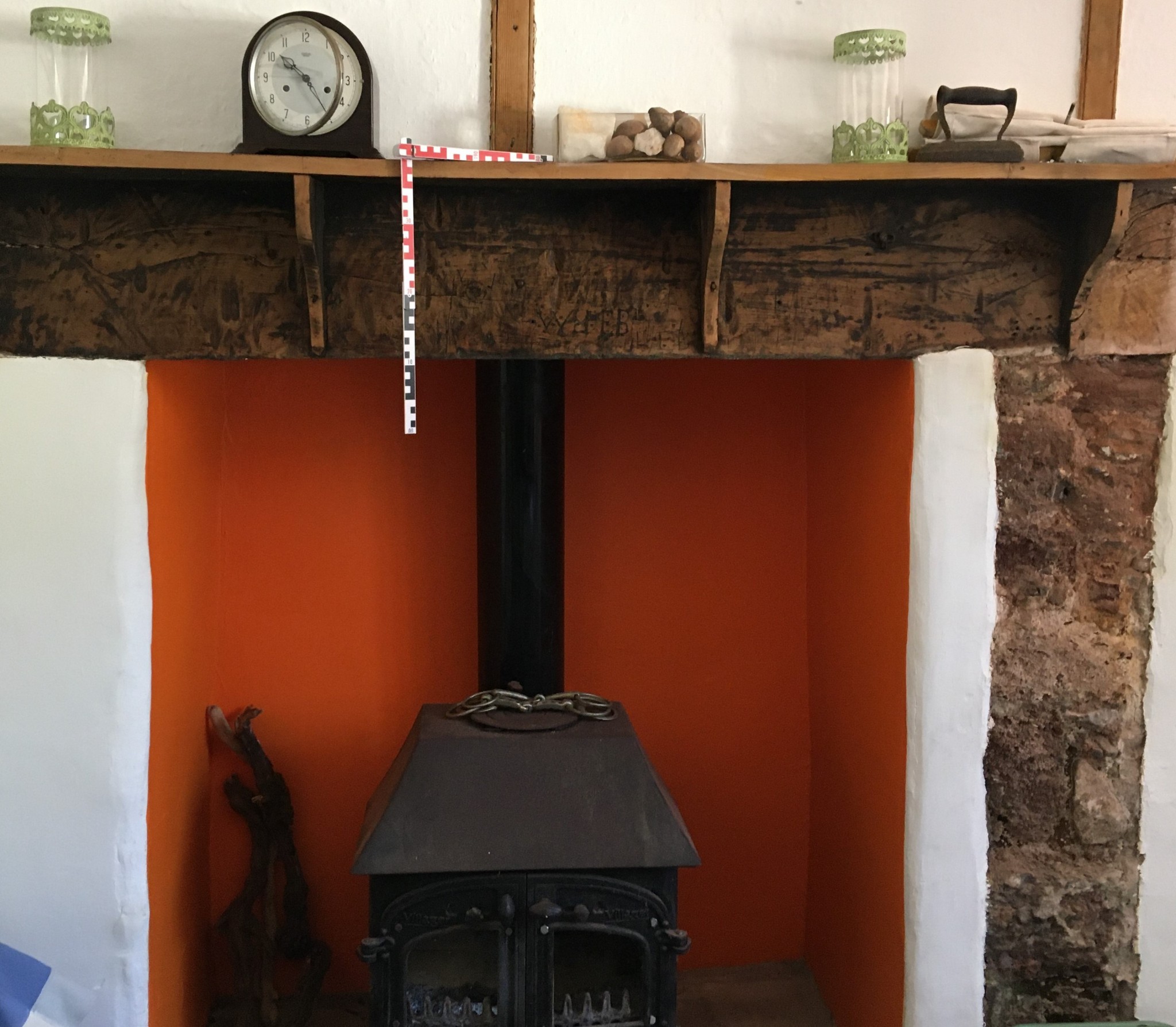 A fireplace lintel from a farmhouse in Stokeinteignhead, Devon

As lockdown eased I was invited by a local farmer to look over an historic farmyard on the outskirts of this typical Devon village.

The buildings comprise part of a busy working farm, and cannot be visited by the general public.

The trapezoid of original farmyard and buildings is sited close to a reliable spring, and appears to be medieval in origin. The original longhouse survives as one range of the current farm buildings. The internal upper floor, which has an exterior access, is intact at the upper, human-habitable, end of the house, although any original render and plaster has long gone, and breaches in the walls have been patched with new blockwork. The lower, animal-habitable, end is still used as penning. None of the buildings incorporates fine building stone of a type suitable for incising or carving; the majority being locally produced cob, with occasional granite quoins and steps. All the older yard buildings, originally thatch, have been re-roofed with corrugated sheet in recent years, and are now used for animal housing or storage, and most of the woodwork has been replaced many times. No early wooden lintels seem to have survived.

Because these are fully functional working buildings centuries of upkeep, repair and replacement have eradicated any obvious signs of apotropaic markings. There is a probability that some survive among the remaining older, but currently inaccessible, roof timbers. 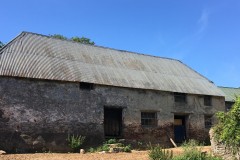 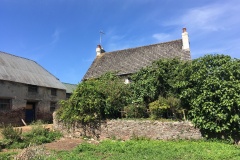 New farmhouse
At some point a new farmhouse was developed to the north-west of, and at right angles to, the medieval house. The style and form of the building, coupled with changes to the yard outlines depicted in earlier mapping, suggests that this was during the 19th century, at a point between 1840 and 1888. The new house appears to have been an extensive redevelopment of an older building already existing on the site.

To the graffiti hunter’s satisfaction, a brief final (and of course socially distanced) glance into the former kitchen of the current farmhouse revealed a small trove of markings over the fireplace. 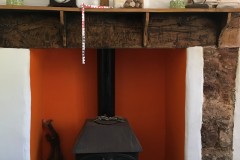 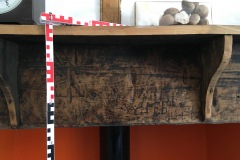 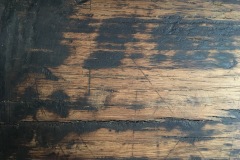 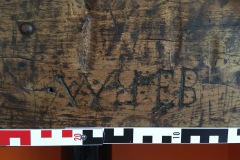 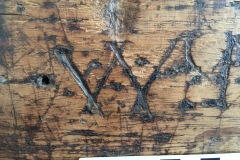 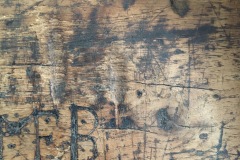 EB, taper-burns
The fireplace as it stands is believed to have been reduced to take a standard two burner Aga, which was the former kitchen stove, although the relatively small dimensions would be in keeping with a later 19th century domestic origin.  The lintel has been extensively resurfaced with a modern disc sander, leaving circular tool marks across much of it, so the surviving marks will originally have been very deeply incised. It is not clear whether the lintel has been taken from another location, but the nature and orientation of the marks tend to suggest not.

The most prominent mark is a set of letters, possibly initials, just right of centre as you face the fireplace. These comprise a W (formed of crossed Vs) followed by a figure comprised of two uprights joined by a small X. The second upright, reading conventionally left to right, forms the upright of an M which shares its other upright with an E. The final letter is a separate B.

The first impression is of two sets of conjoined initials, possibly sweethearts or children of the family, but closer inspection shows that the W mark is not attached to the other conjoined letters, and tends to the idea that the W is a Marian symbol. The conjoined initials are potentially using a  butterfly mark as part of their design, implying a possible apotropaic function of the mark for the owner(s) of the initials. (The notion that this symbol is intended as a rune has been considered, but seems highly unlikely in this part of the UK – unless a magical professional was involved).

The most frequent marks are taper burns, all of significant depth, despite being reduced to some extent by the modern renovation, they are scattered right across the surface – an appropriate and thorough inoculation for a kitchen fireplace.

The rest of the surface is lightly incised with multiple criss-cross marks, and has been liberally inoculated with taper burn marks, some of which must have been a considerable depth when new, given that the surface has been mechanically abraded. A few of the crossed marks may also be intended as Marian marks: the amount of crossing and the modern sanding of the surface make it difficult to be certain. 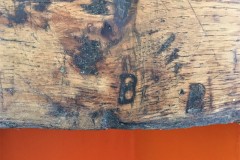 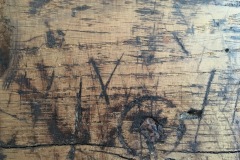 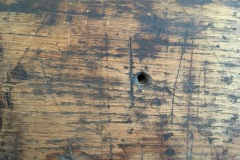 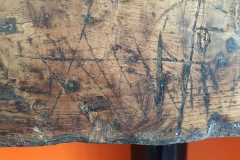 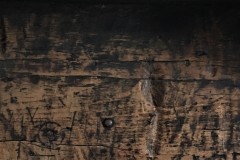 Taper burn-marks
In addition there are two circles, one almost certainly the result of some object or utensil having been attached to the woodwork and then rotated, leaving a groove over time. The other is more regular and has had an iron nail driven into its centre.

Given the need to maintain social distancing at this time, access to the rest of the house would have been intrusive and inappropriate, but this initial collection of apotropaic marks suggests that there should be more to discover in the rest of the building.

This is a busy working farm, unsuitable for casual visiting and the owners, while happy to contribute their graffiti, wish to remain anonymous.