The Trotula: A Medieval Compendium of Women’s Medicine 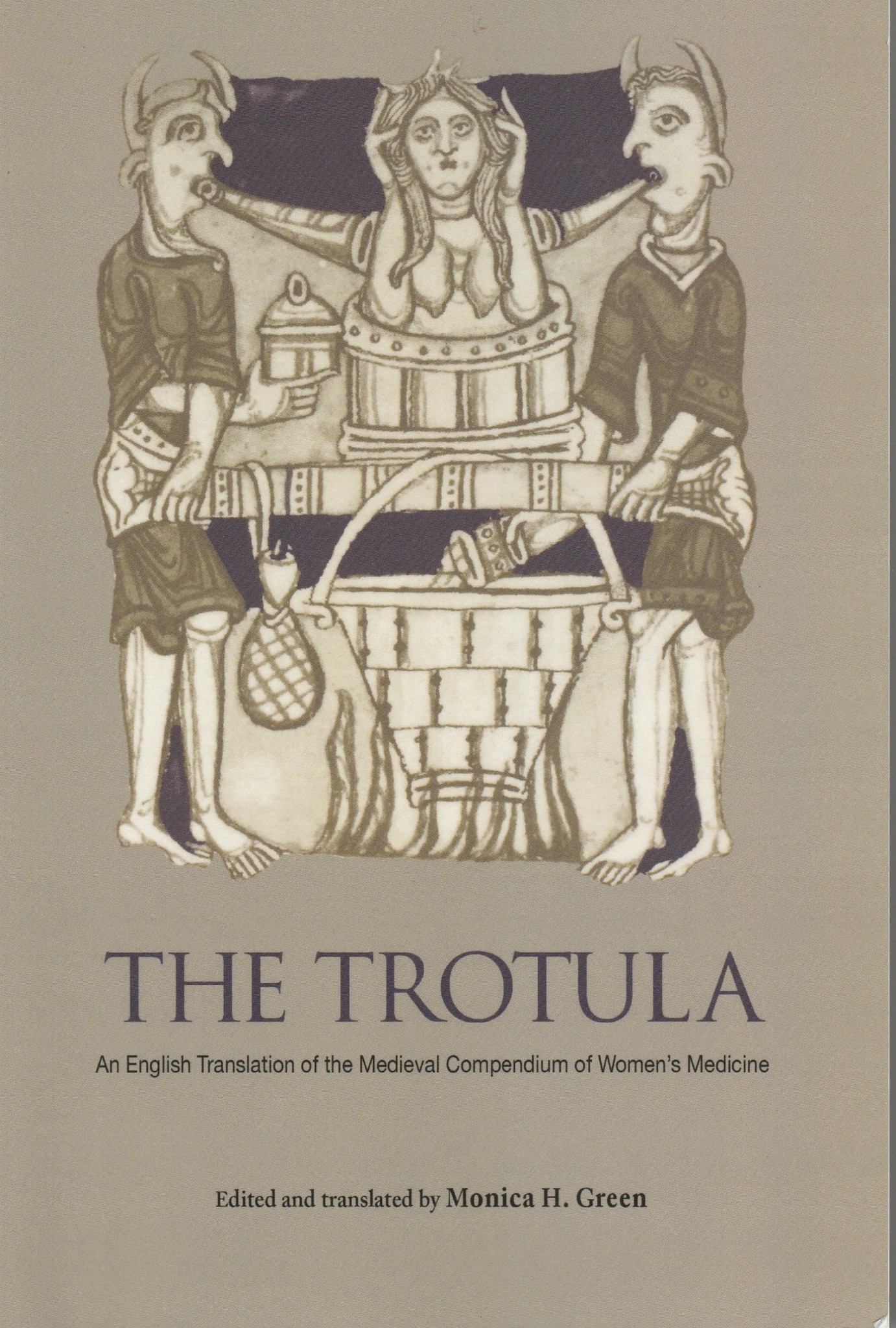 Edited and Translated by Monica H. Green. University of Pennsylvania Press 2001
An accessible English Translation of the Medieval Compendium of Women’s Medicine.

This modest paperback book represents the pared-back core of a much larger academic work by Professor Green, who in 2001 published a hardback Latin – English translation, with the texts set in parallel, and with ‘full critical apparatus for those who wish to consult it’, along with a comprehensive list of medieval Latin terms. The paperback omits the Latin, conflates and condenses the annotations and substitutes a list of materia medica for the full list of Latin terms. For the average reader, curious about medieval medicine (as distinct from the Medieval Latin Scholar), it is more than adequate in its scope.

The contents of the book, placed expertly in context by Monica Green’s preface and extensive introduction, centre on three texts concerning women: ‘On the Conditions of Women; On the Treatments for Women and On Women’s Cosmetics’. The three small volumes, which originated in eleventh or twelfth century Salerno, have for centuries been collected together, under the by-name ‘Trotula’ and ascribed to a single learned but otherwise anonymous female author Trota (or Trocta, or Trotta) of Salerno.

What becomes clear, reading through the lengthy introduction, is the sheer scale of subsequent interference, translation and editorial licence that stands between any original identity of the authors and a modern readership. Unpicking and translating the three works, Monica Green concludes that one, Treatments for Women, would appear to be largely by the shadowy Trota, ‘whether or not she authored all the parts of the text as it now exists’.

The two medical texts draw on both Arab and Western European sources, and broadly align with the basic Galenic theory of humours, and were so successful that they rendered their early medieval predecessors ‘virtually obsolete within a century of their creation’. The books, often circulated with other texts from (or allegedly from) the respected medical practitioners of Salerno, achieved immense popularity, and were copied and in circulation in Europe until at least the mid-16th century, albeit in severely altered and edited forms. The Galenic theory which informed them endured almost in its entirety until this point, and was still influential until well into the 19th.

The Trotula, in all its parts, is clear and specific about what to do and how to do it. Dealing principally with gynaecological and obstetric medicine, but occasionally providing cures for men, its principle aim was the care of women. It seems, if its popularity can be gauged from its remarkable lifespan, to have been considered invaluable. Indeed, until the advent of antiseptics and anaesthesia, in the 19th century, and finally of antibiotics in the mid-20th, for most people the hard reality of medicine was that you took whatever concoction was considered useful (with or without a charm or prayer to assist it) and hoped for a cure.

A slightly flippant example of the treatments available, prior to the industrialisation of pharmaceuticals and cosmetics, may be given by comparing one of the simpler recipes from the Trotula with one from Mrs Beeton’s Book of Household Management – surely the least likely pairing of references.

1. For chapped hands: take bitter almonds, oil of sweet almonds, the yolk of an egg a little tincture of benzoin and 10 drops of oil of caraway. Blanch the almonds and beat them to a paste, gradually adding the two oils, the benzoin and the egg. The hands should be well washed and dried with a soft cloth and the ointment then rubbed well into them.

2. For pain in the eyes: take marshmallow, the herb of violets, tips of bramble, dried roses, vervain and surmountain. Foment the eyes in the evening and make a plaster from the same herbs with white of egg and apply it.

(See the bottom of the page for references)

It has to be thought provoking to consider that the volume of Household Management, this edition published in updated form in the early 20th century, contains a recipe that sits so easily alongside one from the 12th.

The use of charms and amulets in the Trotula is at a level which appears low, compared with the use of them in areas firmly ascribed to ‘folk’ medicine, underlining its provenance as a serious medical text. Four references can be found; two to uses of amulets – jet, to ward off the risk of conception, and coral, to be worn during labour to assist the birth. One of the other two is commonly found in other charms, using the words of the Sator square, among other letters. In this case to be inscribed on cheese or butter for the woman in labour to eat. (Professor Green asserts that the edible charm has ‘no Christian element whatever’ which I believe to be an error. The parchment birth charm which she cites as an illustration of this use of the Sator square (fig 7, p 35) is a low resolution image, but it is possible to make out the four symbolic animals of the Evangelists at the corners, and the Sator square itself, whatever the disputes concerning its origin, had been assimilated as an acrostic of the Paternoster by the 12th century). The final charm is a prayer to be said on the cutting of the umbilical cord: ‘Jesus Christ is dead, he was pierced by the lance and he took no thought of any ointment or of his pain or of any unguent’.

This is a fascinating book, densely packed with information and diligently glossed and referenced. In relation to the student of folk magic and folk cures it is something of a side issue, being concerned primarily with promoting the best medicine and medical practice of its time. However, it is also a worthwhile insight into what specialist medicine might have looked like during a period when the majority of folk had recourse to something far less refined, and its echoes are detectable in some remedies surviving well into recent times.

The Trotula, Edited and Translated by Monica H. Green. University of Pennsylvania Press 2001