The Archaeology of Ritual and Magic 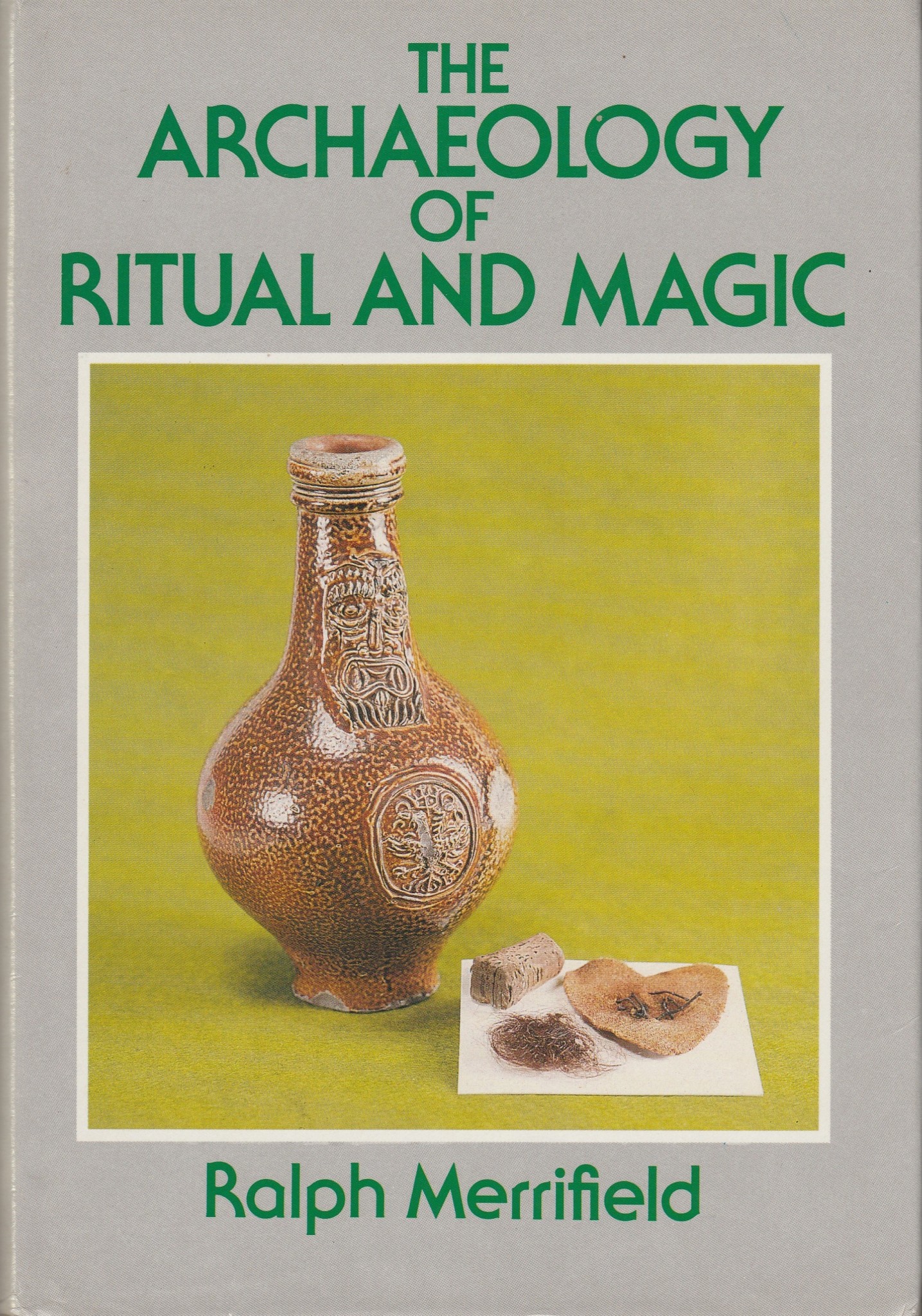 The Archaeology of Ritual and Magic.   Ralph Merrifield, Batsford, 1987

The Daddy of them all.

In 1987, Ralph Merrifield, retired archaeologist and recognised authority on Roman London, set out to publish, for the first time, a systematic review of the evidence for ritual in archaeological contexts from prehistory to the present day. As reviewer, now, of his work, I feel a need to repeat part of that: for the first time.

As Merrifield himself says, acceptance of even the possibility of ritual activity being responsible for some archaeological deposits has varied through time, and across the different specialisms that constitute archaeology as a complete discipline. Prehistorians seem never to have had too much difficulty with the notion; Victorian archaeologists were happy to consider it, and seemed aware of ritual in their own lives, whether mainstream religious or of a more covert and ‘superstitious’ nature. Earlier observers of the human past were similarly untroubled by the idea. The 20th century however, racked by two world wars and a desperate need to be rational and scientific at all costs, saw many archaeologists taking a firmly processual line: considering all human activity in purely practical terms of survival, formal religion, trade and industry. A form of ritual phobia developed. ‘Woo-woo’ was unacceptable; irrational. Into the gap they created fell much of the evidence that might have been collected for ritual behaviour on Medieval, Roman and (perhaps most intriguing of all) post-Roman sites. (As ever, the prehistorians were slightly better able to cope with the notion of ritual). On occasion ‘special deposits’ were grudgingly acknowledged, baldy recorded and often left out of the final report.  The word ritual itself acquired a gloss of impropriety; ritual was what you said, as a bit of a joke, when you found something difficult to explain. Ritual was seldom a word for a serious write-up.

A few publications before this date had covered some aspects of what we now know as folk rituals. The late 19th century folklore recorders captured a good many. Christina Hole, working in much the same tradition, published The Encyclopaedia of Superstitions in 1948; Ralph Merrifield himself published on witch bottles in the 1950s. Violet Pritchard in 1967 gave historic graffiti its first public airing, but no-one in the world of modern archaeology, aside from Merrifield, dared to put their head above the parapet and suggest that zealous 20th century excavators might actually have been missing important data.

This book, then, at the shamefully late date of 1987, finally brought together evidence from all periods and contexts, collating unpublished as well as published data that pointed to the existence of continuous and continuing ritual behaviours among human beings for as long as human beings have existed.

Thirty three years later we are in the position of having PhD students taking ritual activity very seriously indeed; we have students of folk magic and folk religion, and graffiti recording groups are springing up across the counties like mushrooms, but back in the ‘80s The Archaeology of Ritual and Magic was something of a ground breaker; almost a bit woo-woo itself.

Today, it would be easy to smile patiently at this book, reflecting that not a few parts of the 20th century left a lot to be desired, and that it was hardly surprising if people sometimes let their idealism blind them to the untidier facts of human life, and that we know better now. Well, maybe we know more. The value that still lies in this book is that it is very well written, and that most of it is still relevant. I re-read it (not for the first time) for this review, and it was as enjoyable as it was in 1987. The examples of ritual practices and deposits that it records may now be well known to most people interested in ritual and apotropaic activities, but the calm and measured account of them is well worth reading in Ralph Merrifield’s own words. He is a pleasure to read: composed, amiable and very well informed. He provides one of the fullest and most logical accounts of finding and analysing witch bottles, coupled with their possible uses and their evolution as apotropaic and counter-magical items.

An interesting and intelligent résumé of the uses and occurrence of the SATOR square raises an interesting issue; the original Latin version was written in the reverse order, beginning with the ROTAS line. SATOR suggests a non-Latin grammatical construction, i.e. the person making the charm is not a Latin scholar, an interesting piece of information if one considers the input of folk magicians to the written record. And if you happen to be curious as to what to do with a dead badger, he includes details of how to use it in a charm for protecting land boundaries.

The majority of the examples he cites are now classics of their type – essential references if you are taking this study seriously. The domestic protection rituals are nearly all there in some form or other. The inspiration for much of Brian Hoggard’s 2019 book Magical House Protection is represented by a single chapter, almost the sum total of published knowledge of the subject in 1987.  Graffiti hunters will perhaps be slightly disappointed as only one single incised line of semi-gibberish is included in the otherwise well illustrated chapter on charms. Merrifield notes: ‘Graffiti in old buildings occasionally survive, and may have a magical significance’. Which seems incredible now we’ve had a glimpse at what’s out there. It was a year later, in 1988, that Timothy Easton published ‘Apotropaic Marks, Scribed and Scratched in Barns and Houses’ in the Newsletter of the Suffolk Institute of Archaeology and History. But perhaps one might reflect that every study needs its seminal moment, and that was it, right there. A flurry of subsequent publications beginning in the 1990s gradually began to fill in the gaps left visible by the removal of the stigma of woo-woo and the rest, as we know, is history.

If there is a tiny weakness it is one born of the thinking of his time: the acceptance, now seriously questioned, of the existence of a head ‘cult’ among the Celtic peoples. But, since heads were clearly a favourite motif in Celtic arts and crafts the difference between ‘cult’ and ‘fashion’, based solely on surviving artefacts, will always be difficult to determine.

However, this is a minor quibble in a book that dared to break new ground and question an industry-wide scepticism. The final chapter is an extended plea for the objective study of superstitious ritual and an understanding that archaeology, having failed fairly comprehensively to record any, could in fact be a major contributor to its investigation, enabling sufficient volumes of reliable data to be retrieved to allow confident interpretation of events – or at least, some events. And in the final chapter, alongside the plea for data, a ghost of archaeology past rises: the ever worrying, nebulous spook of ‘intent’. Intent is the core of magic, purest woo-woo. Quantify that in an archaeological context. And that, still, is a stumbling block for the more conventional.

I met an old acquaintance on a train a couple of years ago (this is a digression, you can skip to the end if you like). We’d known each other as postgraduates. She had become a landscape specialist, hiking thankless miles across rough terrain with laser scannng equipment in her luggage. I, while still deeply engaged with landscape, had somehow sidetracked into standing buildings. I cheerfully announced my joy at finding graffiti and received a blast of irritation. Graffiti hunters, it seemed, were undisciplined, unsystematic and often poorly informed. The expression woo-woo did not actually enter the conversation, but it soughed around the railway carriage as we rushed through the Wiltshire twilight. So, there we had it: serious archaeologist still not all convinced that graffiti recording is a ‘real’ part of the discipline.

Detecting intent will always be difficult, if not impossible, but that need not prevent a disciplined approach to recording the basic data, by even the humblest contributor to the study. The more conventional will eventually realise what they’re missing.  In Ralph Merrifield’s own words, in his final sentence: ‘A wide territory that is almost unexplored lies open; it should never be out-of-bounds for archaeologists’. Or indeed anyone.

Unfortunately this book is now out of print and can be eye-wateringly expensive. We can only hope that some inspired publisher sees a howling gap in the market and produces a re-print or e-book.

It is available for loan from a long list of academic and university libraries – see Library Hub Discover (the replacement for COPAC, for those readers who remember that service)