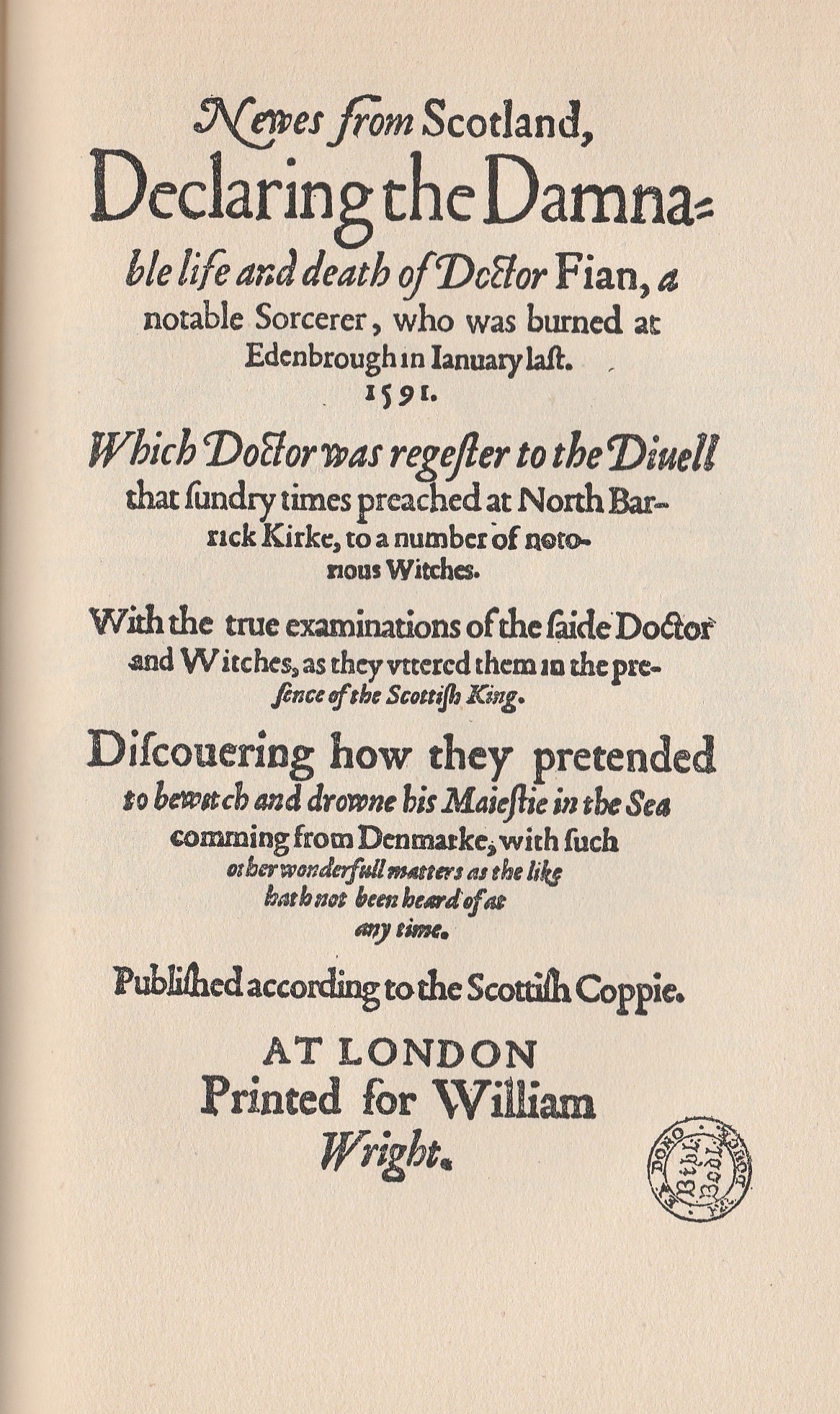 Jacobean tabloid journalism at its finest.

I feel a pause might now be necessary to allow the more traditional-minded of our readers to recover their breath, however, having re-read this little pamphlet for this review, I can’t be genuinely contrite.

Newes from Scotland, despite the quaint spelling, is a pacey and well-written little piece of journalism. The crème de la crème of anti-witch propaganda in an age that wanted little persuading, the pamphlet also has some of the few contemporary woodcut illustrations relating to Scottish witchcraft and is considered to be the earliest printed document concerning witchcraft in Scotland. It also provided the first description of the devil’s ‘osculum infame’, or the obscene kiss, as known to the English population.

James VI of Scotland, some years later to be James I of England, was the Lord’s anointed. This, above all else, is something that needs to be kept in mind when reading his first anti-witchcraft publication. It wasn’t just that he said it as a piece of braggadocio, or even that he’d taken it on as one of his titles, it was a fact of his life. He, by virtue of his paternity, by the fact that he’d succeeded to the throne, and thereafter continued on the throne, had to be God’s chosen. It was an outlook than enabled, indeed compelled, him to regard other human creatures as lesser mortals and also supported his view that these envious and inferior creatures would be very likely to consort with the devil in order to work evil against him, not only because he was King, but also because he was the Lord’s anointed. A double risk, and, on the backswing, a double duty to make sure that anyone so minded was found out and dealt with.

Newes from Scotland, the full and rather less catchy title of which is ‘Newes from Scotland, Declaring the Damnable Life and Death of Doctor Fian a notable Sorcerer, who was burned in Edenbrough in January last’ announces very clearly in the subheading somewhat further down the page that it is also an account of an account of some ‘notorious witches’ involved with Dr Fian, and of their true examination ‘as they uttered them in the presence of the Scottish king’.  In the presence. James has no hesitation when it comes to his brisk account of what was done to Dr Fian and the North Berwick witches. He leaves the reader in no doubt as to the treatments involved:  ‘…the torture of Pilliwinckes vpon her fingers, which is a greevous torture, and binding or wrinching her head with a cord or roape, which is a most cruell torment also’. Dr Fian, in addition, was treated to the boots, no further details provided, which smashed his legs.

It is the matter-of-factness that is in the end the most disturbing aspect of this account. In a prefiguring of Hannah Arendt’s concept of ‘the banality of evil’ (in relation to the Eichmann war crimes trial, 1963) James engages with the questioning and torture of witches as a necessary act; the duty of a conscientious Christian and monarch. And all this is presented in a form of catchy journalese – with woodcuts – that would delight a modern day tabloid newspaper.

This little book (barely a book: it runs to 50 quarto pages, including title pages and illustrated end paper) is the precursor of the more famous, more frequently cited, and frankly rather less readable, Daemonologie, James’s three volume tirade against witchcraft that did so much to promote witch persecution as a national obsession.  On its publication in England the pamphlet Newes from Scotland, was included as a final chapter.

The influence of Daemonologie should not be underestimated. It is a thorough discussion of demonology and demons, and covers a range of devilish topics, including werewolves and vampires. It was (despite being written in the tedious, but then popular, Socratic dialogue style) influential – even to the point that the witch scenes in Shakespeare’s Macbeth (first performed around 1606, by which time James was also King of England) conform to the practices outlined in Daemonologie. Which, in its way, would be the zenith of journalistic success – popular modern playwright references your work.

But for those who don’t want or need the full course of Jacobean anti-witch ranting, Newes from Scotland is a very worthwhile read. In a few short pages the reader is exposed to the supreme confidence of a writer who believed in God, believed in the Devil, and believed in himself. There is complete conviction in every line. There is, dear graffiti hunters, no mention of symbols, but for a swift taste of what anyone might be up against if they were caught in the wrong place, at the wrong time, inscribing those symbols on the walls, you won’t do better.

https://www.sacred-texts.com/pag/kjd/index.htm  and at Project Gutenberg

For those preferring a ‘real’ copy the pamphlet is also available in several modern editions, usually in tandem with Daemonologie: