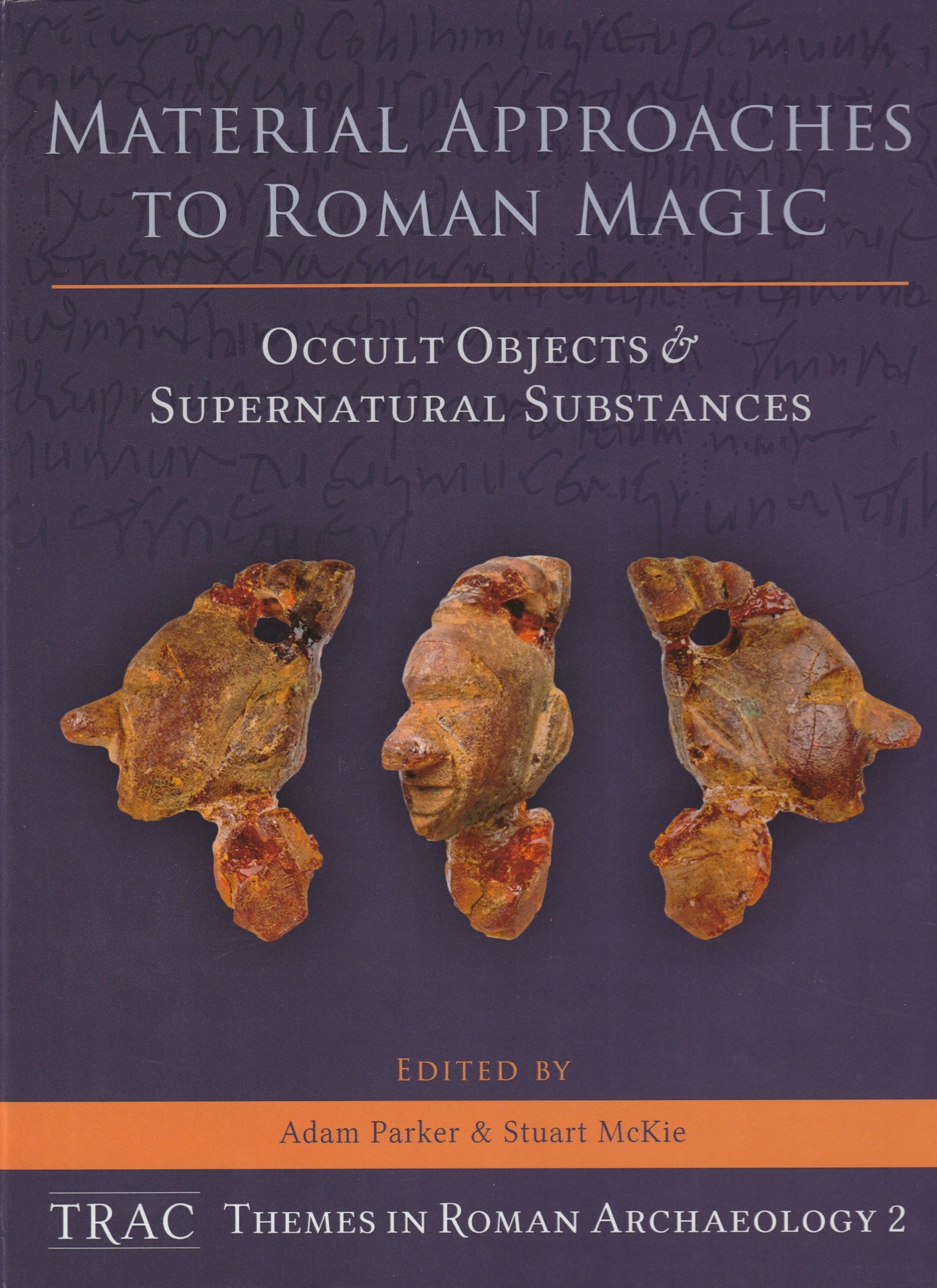 Stern theoreticians wrestle with the nebulous and inconclusive.

The back cover synopsis of this volume sums up, somewhat long-windedly, the need to extend archaeological research agendas further into the field of Roman magic and for greater cross discipline co-operation; a call that applies equally to all involved in the study of magic, its materials and its contexts.

Magic is difficult to pin down at the best of times, and repeatedly in the papers presented here the authors stress this point. As early as page 2, in the editors’ own introduction, the issue is nicely summed up and the difficulty admitted: ‘The elephant in the room, for both the veteran and the uninitiated of this subject, is the question ‘what is magic?’ The short answer is that, as a scholarly community, we have not agreed on a single answer to that question’.  And there you have it in a nutshell.

The archaeological community as a whole has struggled with magic and magical practices for various reasons, but at least part of the problem arises because there is no one pat answer to what magic is. A curse tablet is a clear cut example of one individual seeking supernatural aid against another; an amulet indicates a clear call for supernatural or divine protection, but what about less specific circumstances? A domestic grain processing area can be seen in a context from the presence of dropped grains, from the possible presence of querns for grinding; from the presence of suitable grain storage facilities. This is a fairly standard set of features and the standard archaeologist can be happy in their work excavating and recording it as such. But suppose that the people who created and used the facility performed a small private ritual before using it? Supposing they had a specific set of charms to be recited during use of a quern? Or only to be used on the first use of a new quern? Supposing an old quern had to be buried under the floor, out of either respect for it as a retired servant, or in order to insure that the good spirit inhabiting it would stay on site and aid any new quern?  An excavator then would find the buried quern, they might, if they were sensitive to the possibilities of magic or folk religion, record it as a ‘special deposit’ and if their reading public were very fortunate it might even be mentioned in the final site report. Why that quern was put where it was; what the ritual circumstances surrounding its use and deposit were are mysteries that no amount of excavation is likely to elucidate. The heart of magic is intent, and that is invisible. The incoherent remnants of a ‘special deposit’ may be the only clue there is to it ever having been present.

This lack of certainty has bedevilled Classical archaeology. Prehistoric archaeologists, in contrast, have in general been more receptive to the notion of human interaction with the immaterial world; it almost appears that the more ancient the people under consideration, the more relaxed the academic attitude to their having a belief in magic, and the greater the likelihood that the traces of ritual will be observed and recorded. It is as if we don’t have to feel alarmed or ashamed of the old folk doing weird stuff, because they’re, really, very very old and distant from us and we’re not responsible for them. In contrast the Roman world, which on the surface can look very much like our own (running water, central heating, apartment blocks, takeaway food) seems very clear cut and logical. Our knowledge of much of what happened there is bolstered by the existence of contemporary writings; we even have their books.  Julius Caesar may have served as a priest of Jupiter; it was a normal practice for a young man to take a priestly appointment, but magic? These people are, surely, just us in old fashioned clothes and  can we really countenance such weird practices as a part of their everyday life? In consequence the recording of ‘special deposits’ is much lower and much that is slight and enigmatic and inexplicable (and so, by extension, possibly indicative of a magical intent) simply fails to make it to publication.

The upshot is that there is a shortage of accessible data for potentially magical materials on Roman period sites. Never mind whether it is possible to detect ritual activity in a context, we are not even being given published information on the basic finds in that context.

This collection of papers, arising from the initiative of the TRAC (Theoretical Roman Archaeology Conference) committee, represents a major step forwards in the acknowledgment of the ubiquity of potential materia magica on Roman period sites, and the start of developing a scheme of work to cover their adequate recording and investigation. At last the unnerving spectre of woo-woo is being faced head on; no longer to be denied, ignored or confined to sceptical notes in unpublished reports. The repercussions of this can only aid future investigations of ritual behaviour and materia magica in all contexts. It is, in its own small way (it is a slender collection of ten short papers), ground-breaking. Not even an archaeological pun.

For the graffiti hunter, well aware of the frequent weirdness of human behaviour in many of the more recent historical periods, this may seem like a very esoteric exercise in academic navel-gazing. Surely it was high time these people got out of the ivory tower and caught up with current events? Possibly; but academic work is, of necessity, a slow and considered process. Everything has to be tested and questioned; all ‘proof’ checked. Too much haste leads to too little rigour, and too little rigour leads to insecure theories, and the whole edifice of reliable, verifiable, truthful research starts to totter. It takes time to make a shift of this size; to accept and then to demonstrate that it might be possible to observe the traces of magic, without necessarily being able to define what that magic was.

Despite a lack of attention to Roman graffiti (which surely must have interesting things yet to reveal) there are papers here that consider images on Amulets; on Phallic magic – using an interesting comparison with modern-day phallic charms; on the use of model body parts as magical weapons, which evokes thoughts of both ex-voto shrine models and of inscribed footprints on medieval lead, and on curse tablets, all of which are known to the student of folk belief. A detailed discussion of the material remains included in the burial of a presumed doctor or medical practitioner at Stanway, Colchester, deals not only with the disposition of the medical tools about the body (considered, and surely done with ritual intent) but also the layout of a gaming board included in the grave. Gaming boards being a known graffito, and a significant find in a number of medieval burials, it is intriguing to read observations of an earlier grave find, where the game has not just been laid out for play, but has had the opening moves made. The cremated remains had then been placed on the board; the owner of that board, perhaps, interrupted before their game was finished? There is no clue as to the significance of the act, but it reeks of symbolic intent.

The main reason for hailing this publication (admittedly rather late in the day) is that it represents not merely the acceptance of the need to recognise more ritual activity than has hitherto been considered for this period, but also the realisation that the task cannot necessarily be completed by archaeologists alone. More than one discipline will need to be involved, as anthropologists, social historians and museum professionals are drawn into the necessary investigations. The foundation of all the theory yet to be developed will be adequate recognition, recording and publication of potentially magical material culture, and at last this intent has been made public.

This is a swift and informative read for anyone accustomed to academic archaeological writing. Those not accustomed to the format may find it dry going, but it is worth the effort in order to get a taste of the ancient practices, which may (with the qualification that we may never know for certain) form the foundations of some of the medieval and early modern practices that we encounter. Once the reader enters into the style there are some fascinating and thought provoking pieces of information to be found.