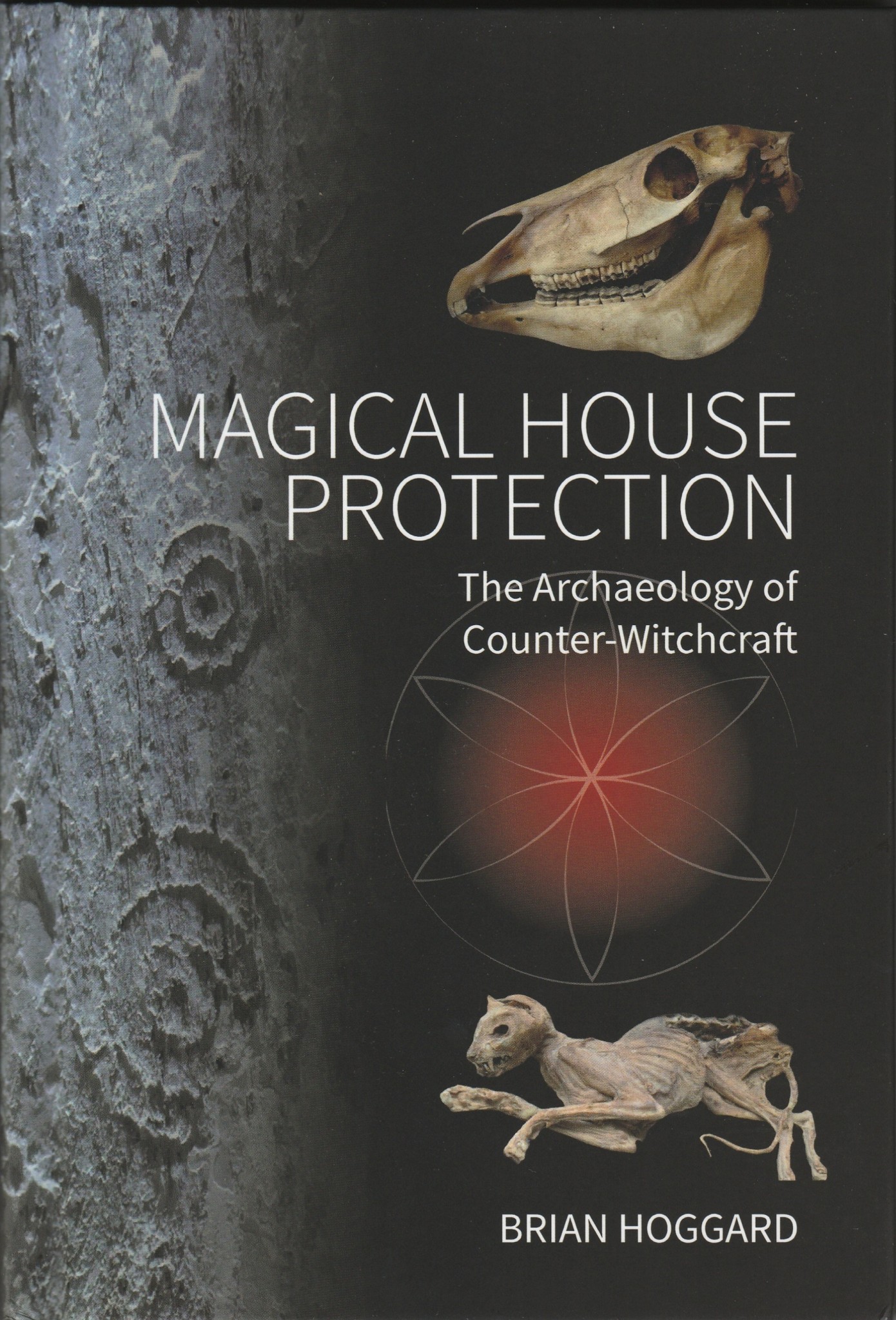 A solidly researched synthesis of the archaeological information to date.

Brian Hoggard’s 2019 book presents a thorough and vastly increased collation of information on the specific area of magical house protection, a subject first introduced to the public as barely more than a single chapter in Ralph Merrifield’s pioneering book, The Archaeology of Ritual and Magic (Guild Publishing, 1987).

Hoggard takes as his premise that witch trial records communicate the belief systems of an elite, imposed upon both accused and accusers, and consequently fail to record what people in general felt or believed about witchcraft.  The terms ‘witches’ and ‘witchcraft’ in this volume, in common with Ronald Hutton’s book The Witch (Yale UP, 2017) being used to indicate malevolent workers of evil magic, as distinct from the numerous people and practices, magical in appearance to modern eyes, that provided every day comfort and cures.

In contrast to the biased and incomplete records from trials, Brian Hoggard proposes that the study of artefacts, provided that their contexts and history has been adequately documented (which is an ongoing issue given the lack of general knowledge of the subject and the ephemeral nature of some of the items concerned) casts a much clearer light on what people were doing to protect themselves from evil witches and their magic, and consequently on some aspects of their belief systems.

The result of Hoggard’s work, which commenced in 1999 with a survey of museums and archaeological establishments, has resulted over time in the creation of the largest database in the world for apotropaic objects, housed on his website, Apotropaios. The collection, and the research involved in collating this massive project, have now produced tangible, in addition to virtual, results, in the form of Magical House Protection.

The distillation of twenty years’ collecting, researching and writing into one volume has produced a dense and fascinating book, packed with recent and historic examples, accounts from finders of artefacts, and extracts from earlier written sources, all pointing to the ubiquitous nature of active magical house protection in the past, and also to an ongoing sense of the numinous in many of the people who encounter these objects in the present day.

The first section of the book, running to 10 chapters, lays out the background to, and draws conclusions from, seven major types of apotropaic material. Graffiti hunters may be disappointed to find that protective marks, so often the most easily discovered evidence of folk magic or religion, rate only a single chapter: this is not a slight or an oversight. The simple fact is that although marks scored on walls and woodwork may be the most obvious and most enduring form of charm or protection, and the most accessible to the amateur sleuth, they were not by any means the only form of apotropaic measure employed.

The chapter on witch bottles, introduced as a subject worthy of study in the 1980’s, by Merrifield, fills out the topic considerably. The clear historical connection of the start of the practice of using bottles filled with urine, pins and other objects to confound the witch, with the introduction of the Bellarmine ‘face’ bottle into the UK is only one example. Parts of the chapter have been published previously as a single paper in Ronald Hutton’s edited collection of work on Physical Evidence for Ritual Acts, Sorcery and Witchcraft – A Feeling for Magic (Palgrave 2016). Similarly, the chapter on Horse Skulls. A deeply interesting investigation of the use of horse skulls, often quite openly, in the construction of buildings, once written off as being for acoustic purposes, is in fact, at root, clearly protective. This too appeared in A Feeling for Magic.

And that’s the rub: some of the chapters have, inevitably, been issued in at least some form in other publications. This does not by any means diminish the work, but it does mean that if you have been following the plot so far, you will probably have read those papers, been to some of those conferences, heard those conclusions drawn, in similar words, in different fora, but still; you will have heard some of this before.

The second, and larger, part of the book, is formed by small set of case studies and a stupendous gazetteer of finds, arranged by county. These are only the edited highlights of some of the information Hoggard has both found and been given over the years: anecdotal and unsubstantiated reports have not made the cut, and he points out that many researchers have their own individual local gazetteers, which are not included here.

Seasoned appreciators of folk practices might shuffle themselves about impatiently on re-reading parts of a paper they have met before, but the gazetteer is (unless you have read and digested the whole of the Apotropaios website) a new and fascinating insight into the field. The sheer extent of the material is staggering. Given that this is a selection of the most reliable data, and is not exhaustive as to any one local area, the amount of material dedicated to apotropaic purposes in the past must have been absolutely huge.

And it is that insight that really crowns this book. For anyone new to the field of English folk practices, and magical, or folk religious, beliefs in general it has to be the most solidly constructed and reliable introduction available. For those who have been in the field a little longer it is still a very useful summary of the current state of the study. The Gazetteer however brings it to another level: the realisation of the extent to which a much smaller population peppered its dwellings and outhouses with protective and counter magical artefacts is a sure indication that, indeed, the witch trial reports wholly missed the nature and extent of the beliefs of the general populace.

This book is the result of a huge amount of careful research and the compilation of an awe-inspiring volume of information, and deserves to find a place as one of the standard readers for students of apotropaic folk practices in the UK and beyond.