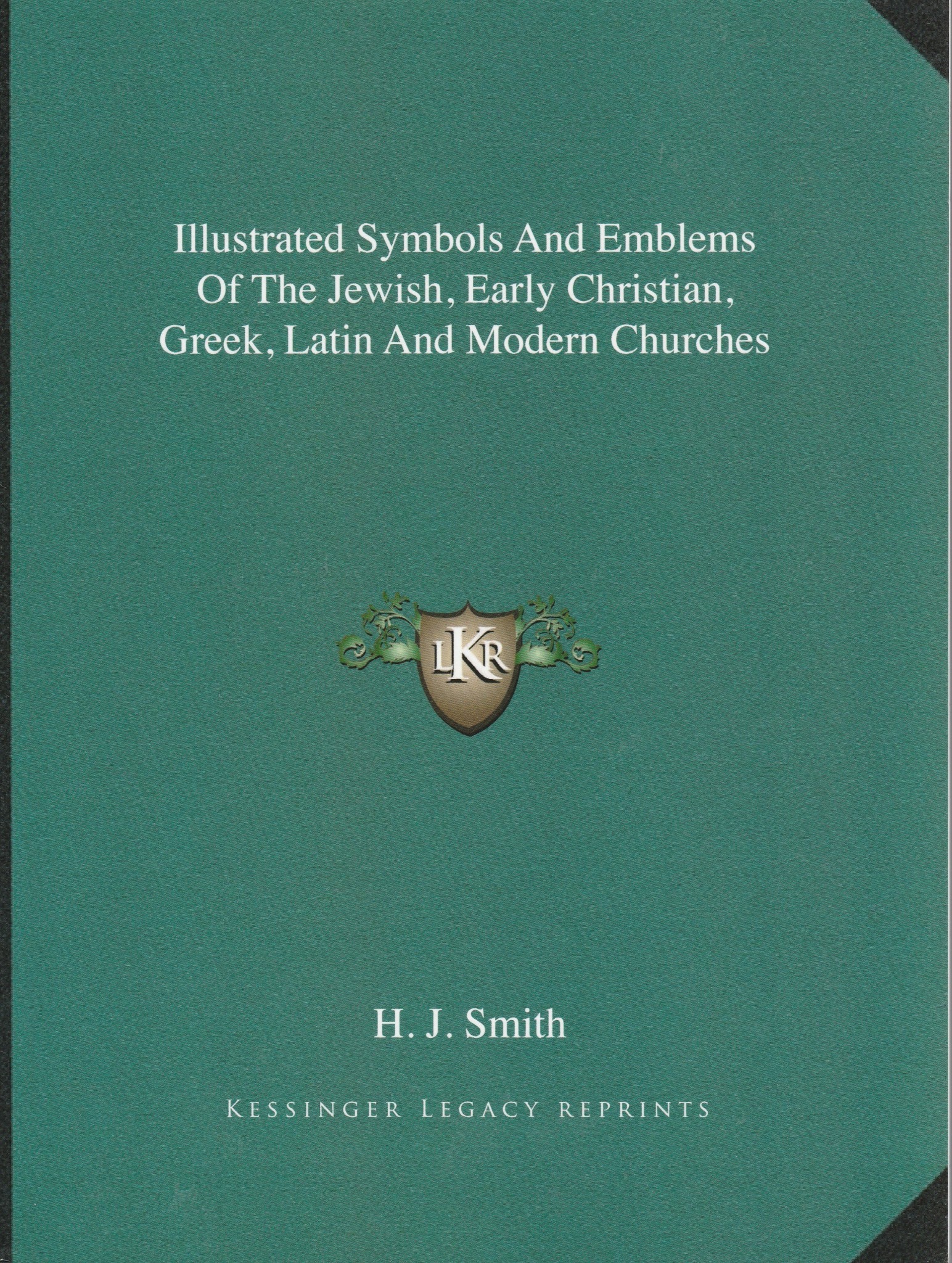 A picture book for lockdown 2.0

Despite the not so catchy title, this scanned reproduction is a charming late-Victorian take on the immense amount of iconography to be found in places of worship. This is helpfully set out in large engraved plates with its official meanings neatly laid out on the facing page. The format is large enough for all the illustrations to be clear, although stylistically the work shows its age. Adam, on the page dealing with the sixth day of creation, is a physically striking gentleman, clean shaven (of course) with perfectly coiffed hair; the ultimate muscular Christian, one would suggest. He is quite clearly naked, with no effete hint of gauze to shield him, but fortunately a robust spray of shrubbery has intervened to save his and our blushes.

Perhaps more comical, and certainly one of the more bizarre illustrations, is a disembodied beard – ‘indicative of a man’ which would probably have been better shown attached to a chin. However, these are minor quibbles.

The inspiration for the book, as given in the preface, was that despite an increase in art schools there was no standard handbook for artists in the USA showing the symbols ‘used so lavishly in our churches’. Mr Smith set out to remedy the omission, inspired by no lesser persons than Augustus Pugin and Owen Jones, both of whom had produced large volumes of ornamental schemes for guidance of artists and designers. Readers with an interest in Victorian Gothic architecture will doubtless know about Pugin but Owen Jones, an architect much less well known today, was a pivotal figure in the formation of the South Kensington Museum (later to become the Victoria and Albert Museum). He was also responsible for the interior decoration and layout of exhibits for the ‘Crystal Palace’ Great Exhibition building in 1851. Augustus Pugin died in 1842 and Owen Jones in 1874; the fact that Mr Smith of Philadelphia references them in 1900 is an indication of their considerable, and international, influence on design in the nineteenth century and beyond.

The Victorian period often appears to later eyes to have been obsessed with church and churches; a public and exhibitionist piety concealing some very dubious private lives. However, there was a factual basis for the appearance of the bricks and mortar of public piety, at least in England. There was reorganisation and a major new building and rebuilding scheme for parish churches. During the 18th century it had become clear that increasing industry and the drift to the towns, coupled with rising a population and (heaven forfend!) a rapid increase in non-conformism, were all conspiring to overwhelm the established church. The result, once the wars with France were finally concluded, was the 1818 Church Building Act, which established a commission for ‘the building and promoting the building of additional churches in populous parishes’. With subsequent extra clauses and amendments the commission ran for the best part of the next forty years, spending in excess of £8,000,000 between 1818 and 1856 and constructing over 2000 new churches, all of them decked with approved ornament and symbolism and most of them owing some debt to Pugin’s Gothic style.

In the wake of the great English Victorian church-building, Mr Smith discovered the need for a volume of symbolic ornament for the use of American designers, and he does not hesitate to use a fair selection of Pugin or Pugin-esque illustrations in his Christian iconography. That said, his catalogue of symbols is not exclusively modern, nor (as he states in the title) does he confine himself just to the modern church in America. On page 181 he discusses the peacock ‘seldom used now … in the early church it represented the Resurrection …’ one can imagine the frisson of horror among the generation that witnessed the rise of Aestheticism, the love of peacocks as decoration and the awful warning of the trial of the arch-aesthete the ‘Irish peacock’ Oscar Wilde in 1895, on finding a peacock in church. Not much used now, indeed.

Directly above the Peacock entry is the one for the sunflower, also an emblem of the dreaded aesthete, but rather less controversial: ‘emblem of the sun or source of light … frequently used in church decoration’. Not wishing to confuse an already confused issue, but is it possible that some of the many ‘daisy’ wheels were intended to be ‘sunflower’ wheels? 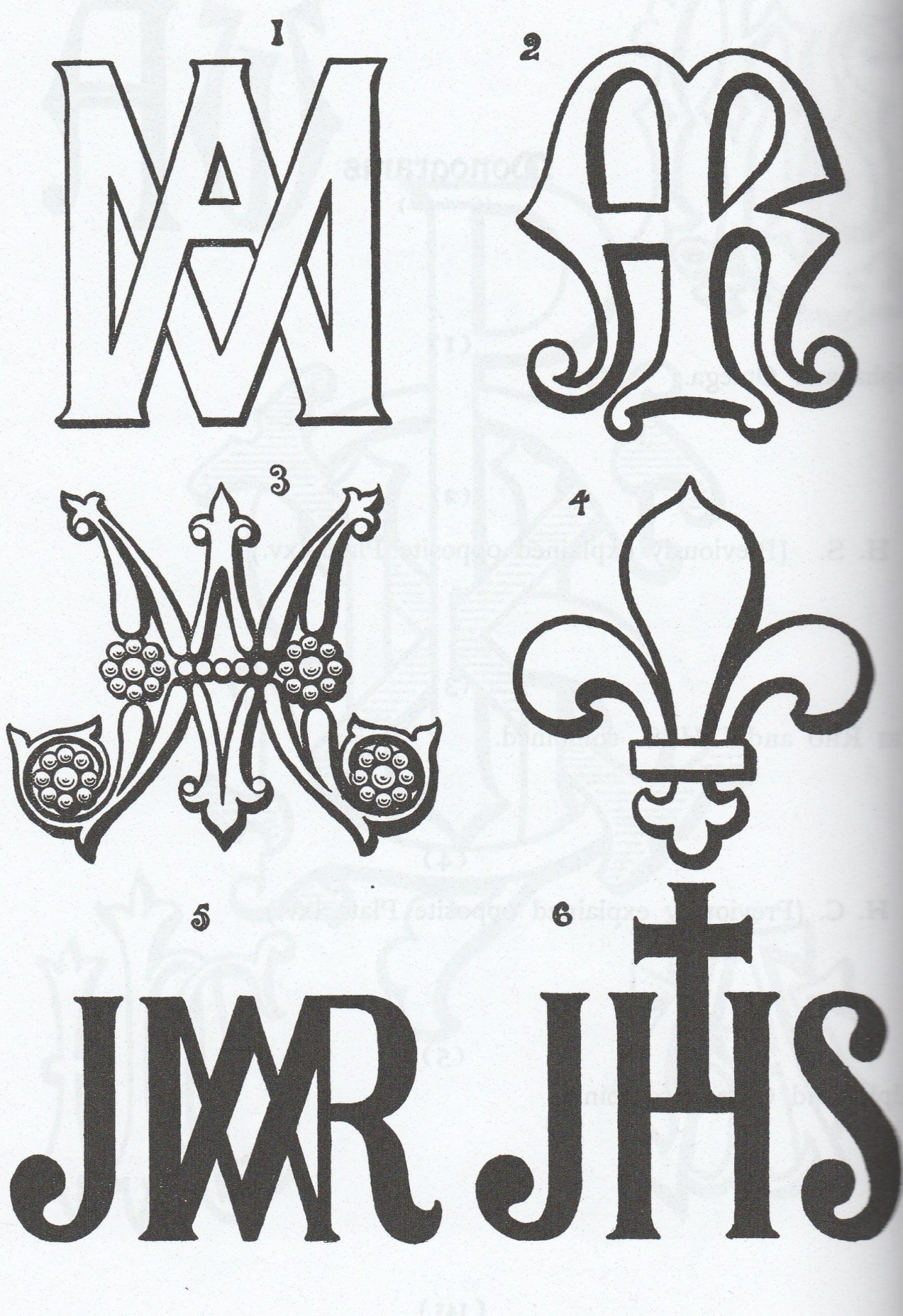 The section on ‘monograms’ runs to six double pages and includes several of the commonly found Marian symbols (plate LXVIII, facing page 147, numbers 1-6 above), along with various Greek abbreviations and acronyms and – not a daisy per se – a six spoked wheel symbol considered to be a monogram of Christ ( plate LXIX, facing page 149, numbers 1-6 below) 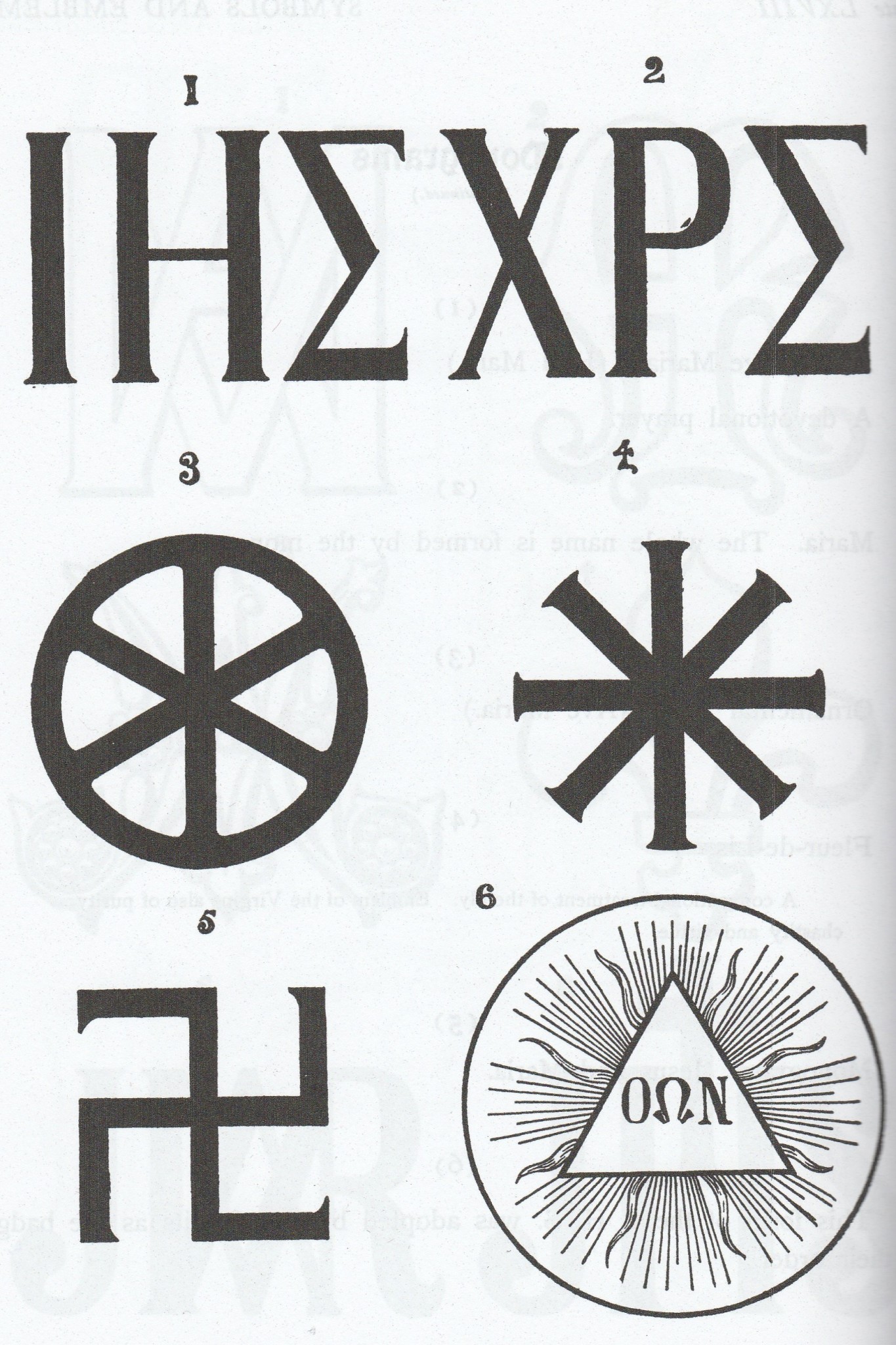 On page 183, dealing with ‘geometrical forms’, we encounter the five pointed star which ‘contains five Alphas (ie letter A, as in Alpha and Omega) and is called the Star of Beauty. Once called the Symbol of Health and held to be a talisman against witchcraft, it pointed out the five places the Saviour was wounded’. One could wish that Mr Smith had referenced the source for his names for the star, but it appears unequivocal that in the US at the end of the 19th century, a five pointed star was acknowledged as a charm against witchcraft. (And, in a curious near contemporary parallel, Oscar and Constance Wilde reportedly had one hanging over their marital bed in London ‘… to protect him against malignity’).

And this is the main use of this volume (aside from the fact that the engravings would all be suitable for colouring in, if that soothes a lockdown nerve or two). Mr Smith has gathered together a mass of symbols, readily available in 1900, with the meanings as understood at that time. In the intervening 110 years we have got out of the habit of reading religious symbolism. For many of us, those not brought up in a religion, not having a bulwark of ancient and superstitious relatives to promote symbols of luck and un-luck and the endless ramifications of folk beliefs, religious symbols are part of a ‘weird’ other life, separate from, and unable to influence, the anxieties of daily life.

As the modern interest in folk religion has developed there has been much learning and re-learning of things that were in everyday use, and we are still not certain of all of them. For Mr Smith and his readers in 1900 the symbols he records were a natural and sanctioned part of religious buildings, and a logically designed handbook was a useful tool in an artistic education. Informal 19th century apotropaic devices and charms have been extensively recorded both by contemporary collectors and by more recent graffiti hunters. Mr Smith gives us the recognised formal symbols. The book quite obviously does not include all the symbols of all the centuries, but it is an insight into the knowledge of the late 19th century, and can only add to 21st century understanding.