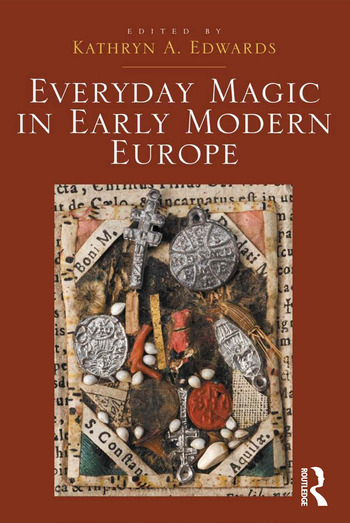 This volume of papers, though led and edited by Kathryn Edwards of the University of South Carolina, represents a pan-European area of research, with contributors from the UK, Finland France and Spain as well as ‘outsider’ input from the US and Australia. It provides a series of well-researched and intriguing glimpses into the totality of both religious and magical practices in an age of almost universal spiritual belief.

As Kathryn Edwards notes in her introduction ‘the last decade of the twentieth and the beginning of the twenty-first centuries have seen an explosion of research on magical practices…’  So, why are we, as graffiti hunters, here on this page? Because we are a subset of that huge new area of interest. Edwards goes on to observe, as many of us who have been reading on the subject have already noticed, that there is an imprecision in much of the literature in defining what constitutes magic, as distinct from religion, as distinct from superstition. Currently scholarly definitions are evolving to the point where the distinctions can be drawn, but older works, and those from less specialist writers, tend to be fairly relaxed in their use of all these terms, adding to the confusion already existing in the primary sources, where, even if distinctions were applied, the boundaries seem to have been endlessly fluid, and ‘supernatural influence and access were presumed’.  As Edwards states ‘the definitions and distinctions between ‘magic’ and ‘religion’ have been … at the heart of many of these debates, and the wobbly ground between the two is where this book is situated’.

As an exploration of the wobbly ground this is a really fascinating collection of papers, using individual case studies and examining their wider contexts and the belief systems in which they operated, to provide a far more integrated version of events. The result is a developing picture, from all parts of early modern Europe, of a well-recognised and, if not safely, at least knowledgeably-navigable landscape of magic. Magic, it seems, was everywhere, at all times.  Religion ran alongside it, intertwined with it, and the margins of the two merged quite frequently, to the concern of the more strait-laced clergy, although the classification of what was magical and what was not varied with who was observing it, and the opinions they held. Superstition was in the eye of the beholder. Clearly defined activities, such as necromancy and astrology, can at any point be classified as magic, but in large measure the rest of the magical spectrum was poorly defined, and its classification depended largely on who was reporting it. Excessive dependence on religious symbols during everyday activities might be superstition, or it might be magic, or it might be genuine religious fervour. Intent, as ever, was at the core, but the perceived intent was what influenced third party reporting and if that third party was the established church, whether Catholic, Calvinist or Lutheran then the consequences could be grim.

This odd triangular relationship surfaces again and again throughout the papers in the book, along with the persistent and recurring evidence that the origins of power seemed unimportant, so long as the outcomes were beneficial. Doris Moreno Martinez, in her chapter on Magical Lives, observes that early modern Catalans tended to resist establishment attempts to ‘delineate and separate the sacred from the profane’ and instead repeatedly constructed ‘dynamic forms of local Catholic religiosity’. In other words, they created their own folk version of the official religion,  in cahoots with the local clergy, so that ‘local religiosity incorporated the divine into the everyday mentality of the people, humanizing God so that he would feel more familiar’.

Similarly, in Lutheran Finland, in the case presented by Raisa Maria Toivo, the debate around magic and superstition had ‘a strong practical component’ and reflected the need of the rural population ‘to act together as a community and incorporate individual customs… Defining magic work and prayer was a daily effort of negotiation to reach a shared understanding’. In the same way, German treasure hunters, using a wide range of rituals and implements in order to bar evil spirits and invoke the good in order to retrieve their prize were generally not condemned as witches. Not because they didn’t use magic – everyone knew they did – but because they were not considered evil. Witches were evil and caused harm; treasure hunting magicians were benign and (if successful) added to the wealth of their locale. In consequence they were generally treated leniently if they were caught by the authorities. In contrast to the treatment of treasure seekers, the issue of divination – the belief that events could be foretold ‘through magical means outside of scriptural prophecy’ was considered dangerous and illicit, although ‘readings of providence’ sanctioned by the Calvinist clergy in German speaking Europe were licit, as highlighted by Jason Coy in chapter 8. The definition of magic in this case resting on who was performing the act and whether they were officially sanctioned.

Throughout this collection the evidence mounts up to show a consistent pattern of negotiation and understanding between the religious and magical aspects of everyday life. Ghosts, spirits, demons, witches, saints, miracles, Satan and God: if all of this is real and all of this impinges on everyone, every day, then there must, of necessity, be some means of navigating the spiritual landscape in safety and that is what this collection demonstrates. The ‘wobbly ground’ was treacherous, but it was negotiable.

This is a fascinating read but possibly not for the faint hearted and at a terrifying £96 (reduced price) probably one best borrowed from a reputable library, or downloaded for Kindle.

by Kathryn A. Edwards (Author)