Book Review: Executing Magic in the Modern Era: Criminal Bodies and the Gallows in Popular Medicine 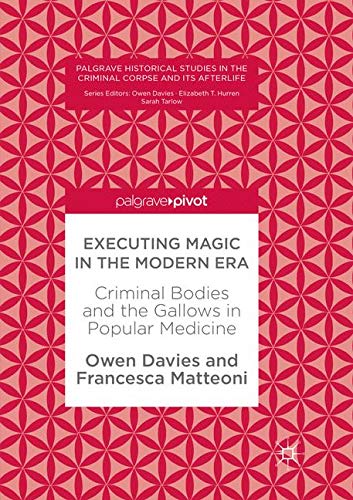 Executing Magic in the Modern Era: Criminal Bodies and the Gallows in Popular Medicine takes an in-depth look at the fascination that the bodies of criminals and their means of execution have exercised over the human mind for many centuries.

In the Roman era, the blood of gladiators was believed to have curative properties and was much sought after. Later, Egyptian mummies were in demand for the same reason and, all over Europe and further afield, the blood and bodies of executed criminals were believed to offer a wide variety of magical cures.

The wood of the gallows on which they were hanged was similarly prized and executioners conducted a roaring trade in their hangman’s rope, cutting it up into multiple pieces, some as small as one inch, and selling these chunks for exorbitant prices to supplement their generally meagre salaries. And naturally there was an equally thriving trade in fakes and forgeries.

This study by Owen Davies and Francesca Matteoni concentrates on the early modern period, from the 1700s to the early 20th century, by which time most European states and several in the US had ended the practice of public execution and, in many cases, abolished capital punishment altogether.

The scene is set by a brief introductory chapter and is then followed by four chapters entitled Criminal Bodies, The Corpse Gives Life, The Places and Tools of Execution and Lingering Influences. In each one, the authors delve deep into the wide range of quasi-medical practices and outright magical belief harboured by the general populace and those that sought to aid them in their search for various cures.

The latter often sought to make a fast buck out of the hopes and fears of the credulous and the superstitious. For instance, this was an age which saw a thriving trade in the fat taken from the bodies of executed criminals, which was believed to be efficacious against a wide variety of medical problems, including broken bones, wounds and smallpox scars. Naturally there were also plenty of cases of animal fat being passed off as human, and there was even an instance of a Paris restaurant owner being sent to prison for using human fat in his cooking!

The book examines the position of the executioner in society, who at the same time was both privileged and reviled, and demonstrates that even in the final days of execution as a means of punishment in the UK and Europe, there was no shortage of applicants for the jobs when they were advertised. The effect of places of execution on the landscape is also examined, showing how echoes of crimes and their punishment has lingered in a wide variety of place names, while the original criminals and their victims have long since passed out of local knowledge. I was left wanting to know more about Gibbet’s Brow on the Mendip Hills in Somerset, as one such instance that came immediately to mind.

This latest volume in Palgrave’s Historical Studies in the Criminal Corpse and its Afterlife series positively exudes scholarship while at the same time remaining thoroughly accessible and veined throughout with a rich seam of gallows humour – and that’s the first time I’ve ever been able to use that phrase in a literal context! There are extensive end notes to each chapter with references that I could lose myself in for weeks, plus a comprehensive and easy to use index.

Owen Davies is a professor at the University of Hertfordshire. He has published extensively on the history of witchcraft, magic, ghosts and popular medicine and, along with the inimitable Ronald Hutton, is one of the acknowledged experts in the field. Francesca Matteoni worked on a major Wellcome Trust-funded project on ‘Harnessing the Power of the Criminal Corpse’ and has published in both Italian and English on this subject as well as on early-modern blood beliefs and familiars. For anyone with even a passing interest in the macabre history of the treatment of the criminal corpse, this book is a must-read.

I was by turn both fascinated and thoroughly appalled by the subject matter. I was also left with the depressing thought that were the post of public executioner to be advertised today, there would be plenty of people queuing up for the job and large crowds jostling to be in at the kill and to take home their souvenir.