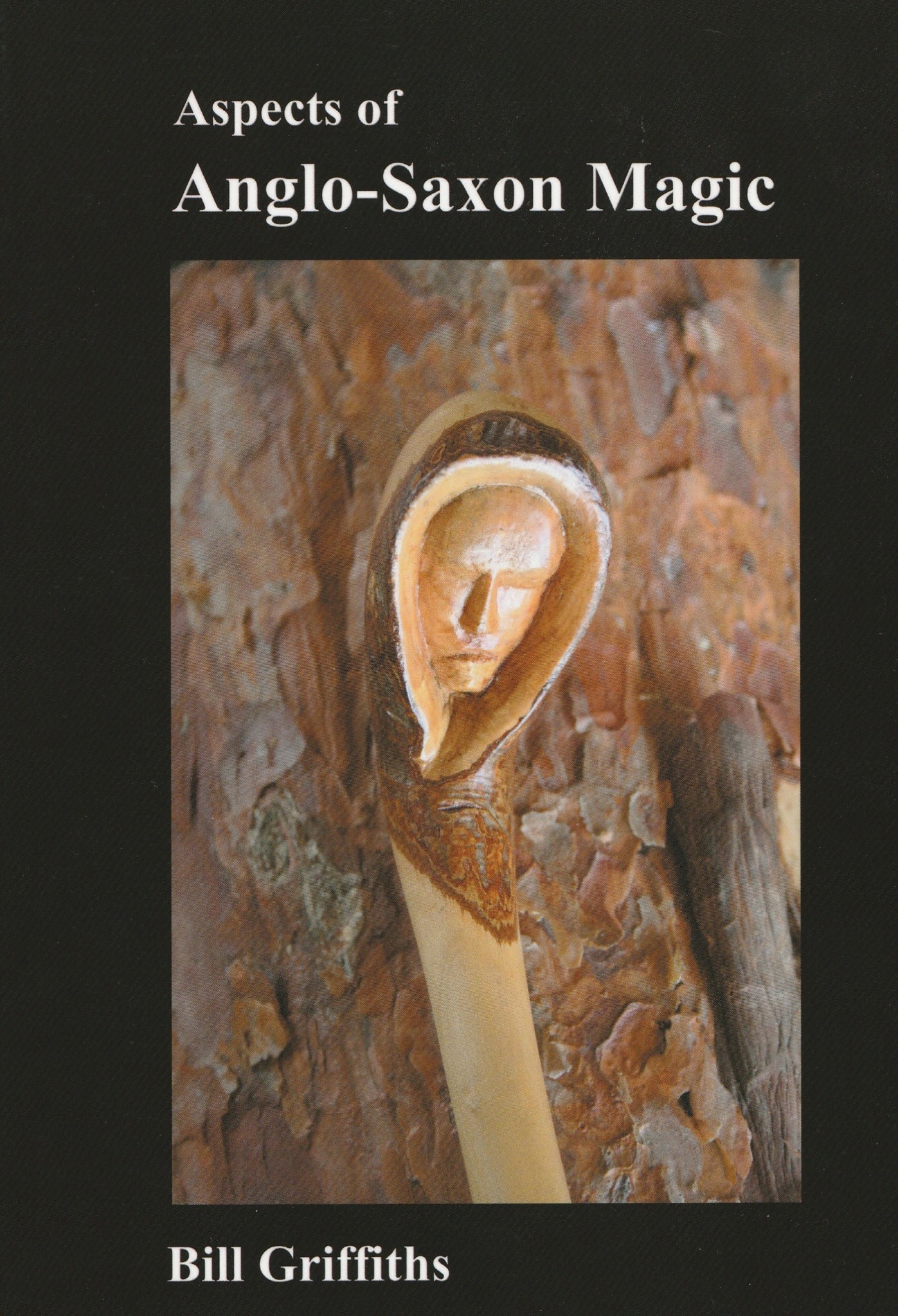 An immersive and joyously erudite foray into the weirder parts of Anglo-Saxon life – but no index!

The late Dr Bill Griffiths was, in no particular order: a poet, an Anglo Saxon scholar and an expert on the dialects of north-east England.

His abiding interest in language and the uses of language is immediately apparent in this fascinating overview of some of the fundamentals of Anglo-Saxon magic, in so far as that can be known from the surviving texts. The book revels in the English language and is a pacey, garrulous account of the Anglo-Saxon world-view, drawing at high speed and with no respect for the reader’s sensitivities, on a large number of texts from the Early Medieval period, in both Latin and Old English. Extracts from all the classic homilies against magic and quasi-magical activities are here. The famous section from the Penitential of Archbishop Theodore of Canterbury (an Anglo Saxon grouch of the first water) often cited against mummers, guisers and Morris dancers: ‘if anyone at the turn of the year go about in the guise of a young stag or calf.. let them do penance for three years..’ crops up in the chapter on animals. Latin and Old English are translated for those not adept at reading them, but the entire book progresses pell-mell, with the ease of the accomplished scholar of his period and at times leaves the reader breathless trying to keep up.

The account is divided into logical sections, covering the parts of the Anglo-Saxon world in order: the worlds of the living and of the dead, the world of animals and of plants, the world of the everyday and the world of the rational. With this foundation we are then led on to the worlds of magic and of science, and the realisation, repeated throughout, that there is no reason why a world-view should not include an element of magic or religion or magico-religious belief and yet also be able to make perfectly accurate scientific observations and rational daily arguments at the same time. Indeed, until the latter part of the 19th century, and well into the 20th, this was normal for the majority of English speaking people.

Hutton, Smith, Lamark and, of course eventually Charles Darwin might have put dents in the Biblical ‘facts’ as previously accepted, but for most people science and religion, if periodically at odds, were not necessarily antithetic. Even in the earlier part of the 20th century, religion was what one did; science was an interesting elucidation of the world which would bring new benefits to all; magic was still practised in country areas (and very likely in towns too, but that might be too uncomfortable to consider). In the early medieval period, however, magic was everywhere and in everything.

That all-pervading sense of magic comes across in this book. A realisation that, even in a rapidly Christianised population, using Christian chants and texts for their charms and spells, there was a constant need for those charms and spells. A modern perspective is a hindrance to understanding the very early medieval, and by extension, the medieval and the later turbulence of the early modern historical period. In the words of Bill Griffiths: ‘It is as if we set up a fantasy of the Christianity of the age, and a fantasy of its paganism, diminishing our perception of either in the delight of attributing the past our own ways of thinking. But the Anglo Saxon periods had a very different set of ‘facts’ from our own, a quite alien set of evidence about reality – one whose effectiveness was limited by resources and knowledge; magic was not an alternative to knowledge, but in its broadest sense part of a way of understanding and coping with the external world’.

Moving on to the magical practices themselves, it is clear that though they had evolved to fit changing times; the concerns they address are the timeless human issues of fertility, security, protection from disease and the deflection of evil.  An interesting practice, highly popular in earlier periods though, one must imagine, diminishing at speed once pious Protestantism came to the fore, was casting lots as a form of divination. Apparently attractive even to devout early Christians, as it was seen as completely democratic and an approved method of indicating the will of God, who was the only one capable of influencing the outcome. The Frisians (from the Dutch islands that were the original home of many of the ‘Saxon’ settlers) were recorded as keeping the lots in a reliquary on the altar, such was the acceptability of the practice as a religious enquiry. (Nonetheless, the Pentitential of Theodore, right on form, warns against the activity as potentially irreligious). One might reflect, not for the first time, on the meaning of gaming boards in burials and inscribed on church walls.

The inherently ‘magical’ property of runes is also held up for inspection. There is, it appears, no reason to regard the primary use of runes as magical; they were an alphabet, and as such were an essential part of a developing economy: as ever, trade wins out over romance. However, that is not to suggest for one moment that they were not immediately used for magical purposes. There is indeed evidence that not only were runes used for magic, in common with every other writing system yet developed, but that they continued in use in magical work well after the widespread adoption of the Latin alphabet by the Saxon settlers: ‘Perhaps there grew a feeling that these traditional alternative letters were more potent than Latin ones, indeed were almost constituting a challenge to the European supremacy of Latin rituals and invocations’.

Regardless of the written format, ultimately it is the skill of the practitioner rather than the form of the letters that carries the weight of the spell or charm ‘Runes remain… a neutral medium (like any letters) the magic or the will to do magic with them, comes from elsewhere’.  But how many ordinary, non-magical, people, looking at an inscribed charm, would not be tempted to copy the letter forms, especially if they were non-standard, in the hope and belief that they themselves held the magical power?  Potentially runic letters in later contexts could easily be an expression of this, without their creators having any knowledge of what the letters meant other than ‘magic’.

There is, throughout this romp of a book, no suggestion of making a graffito on a wall, or signing any symbol around a doorway. Turfs are cut with crosses and replaced in their native field for a land charm, but the gate posts are not included. From the standard graffiti-hunters point of view it is useful background rather than news hot from the press. There is only one mention of inscribing anything other than a portable charm, and it is not a wall or door: ‘If a horse be shot with illness take a knife whose hilt is of yellow horn of the ox and let there be three iron nails in it. Then inscribe on the front of the head of the horse the sign of Christ (the cross) so that it bleeds, then inscribe the sign of Christ on the spine and on such limbs as you can get to…’  Especially useful if Elves be suspected. Aside from modern concerns over animal cruelty, one wonders whether the person who devised this scheme had actually ever met a horse, though the phrase ‘such limbs as you can get to’ suggests a certain escalation of events.

All in all this is an enjoyable and certainly a highly informative read for those interested in English magic. The book so far has escaped serious academic review, which seems a shame, although it has become recommended reading for many pagans. The Contents section is logical and clear; all the references are tidily footnoted with the sources provided so that further reading is easily pursued. HOWEVER, and I make no apology for lurching into capitals – there is no index. The hand of a sympathetic editor (and which of us does not benefit from one of those?) and the labours of a professional indexer would make it perfect.

Available from the original publisher, Anglo Saxon Books in paperback for the slightly lower price of £16.95

or from Abe Books (hardcover only)  and from  Amazon UK.