‘Wot No Air?’ – A Selection of Organ Graffiti in Essex

‘Wot No Air?’ – A Selection of Organ Graffiti in Essex

St Nicholas church at Elmdon, Essex disappointed me in my search for graffiti. While being a lovely church, it is largely a Victorian rebuild and it’s columns and stonework are clearly devoid of any significant graffiti. I was about to give up my search, but I had to check the windowsill behind the organ and it was then that I hit a productive seam of graffiti. The windowsill was empty of graffiti, but the back of the organ held unexpected riches.

Before the introduction of electric air pumps in the middle of the 20th century, church organs bellows were pumped by hand. It was the job of the youth of the parish to supply the power. There, mostly out of sight of vicar and congregation, they have left their mark.

The most prevalent form of graffiti on organs is names and lists of initials. This is possibly the only set of officially sanctioned graffiti as they appear to be rotas of who was to be on organ pumping duty. The stereotype of the organ blower is that of a small boy in shorts and, while I’m sure that largely holds true, there are girls’ names featured so we should not assume that all initials are those of boys. 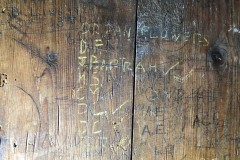 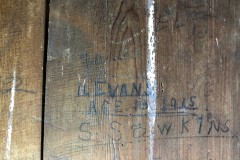 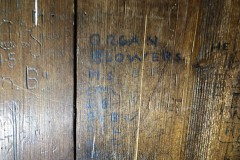 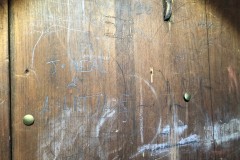 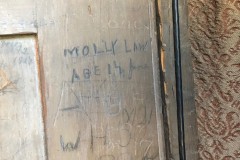 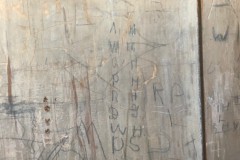 Elmdon - Organ blowers
The local gossip also gets recorded, mostly in the lists of who loves who. It is pleasant to take a moment to contemplate how many of these youthful romances survived. 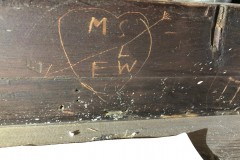 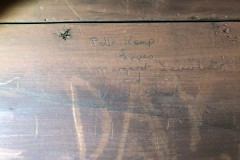 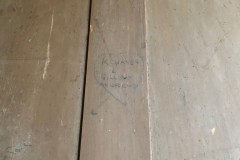 Elmdon - K Hayes loves Gillian Andrews
In some churches you can get a sense for how services were conducted, in Bardfield Saling, Essex, it is clear from the graffiti that announcements of national importance were made from the pulpit and informally recorded behind the organ. Victory Europe and Victory Japan Days are listed, along with the Festival of Britain and the death of George V. A large ‘Do Not Sin’ on the same organ shows that spiritual matters were also being attended to (if possibly at a somewhat basic level). 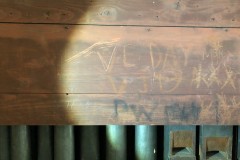 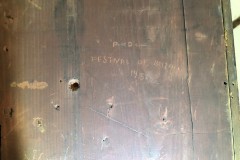 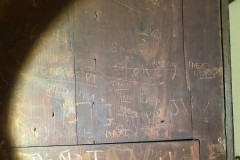 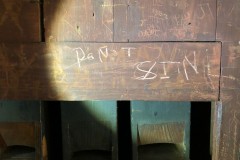 Bardfield Saling - Do not sin
There is a significant block of graffiti that one can put under the category of ‘Wartime’. Small aeroplanes appear frequently and in Little Easton church in Essex a famous wartime character appears – Mr Chad. Although now conflated with Killroy, Mr Chad was a cartoon character who poked his long nose over a wall and enquired about the lack of certain goods due to rationing. At the back of the organ he appears to worried about the how the pumping is going. ‘Wot no air?’ he asks. 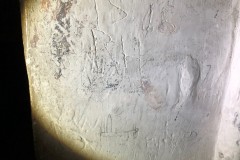 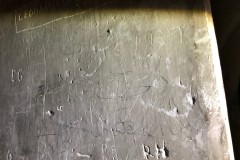 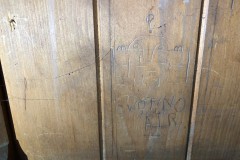 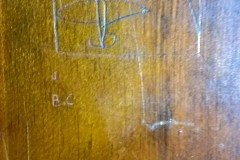 Wormingford - Plane
Humour is prevalent in the graffiti, mostly taking the form of drawings of people. It is possible that some of them are intended to be representations of real people. Little Easton holds one pun, a duck sporting a ducktail rocker hairdo, and the phrase ‘Wot no granny scarf’ which sounds like the punchline to a joke we didn’t hear the beginning of. You can also find childish drawings of animals and other objects that caught their interest. 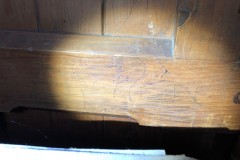 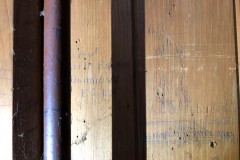 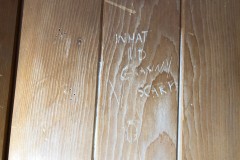 Little Easton - What no granny scarf 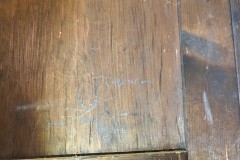 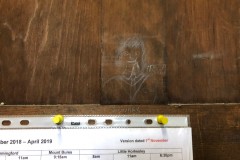 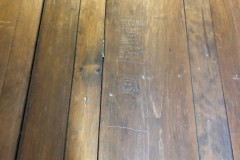 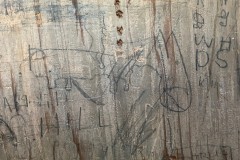 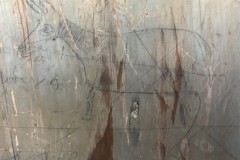 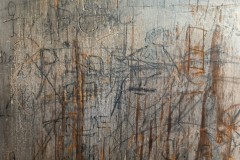 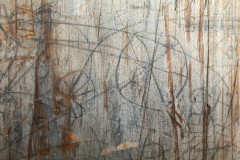 Elmdon - Penny farthing
I am a big fan of organ graffiti. You have the sense of being in touching distance of the not too distant past. Some of the names behind the organ may still be sitting in the pews on a Sunday morning. But sometimes, in among the ordinary you can find the extraordinary. Behind the organ of All Saints, Ashdon, Essex is a perfect compass drawn design. The National Pipe Organ Register dates the organ to 1905, which puts it at a late date for an apotropaic design. It is possible that this example is actually that of a bored choirboy or organ pumper. It’s a mystery, which is always a nice thing to end on. 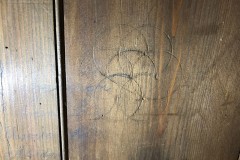